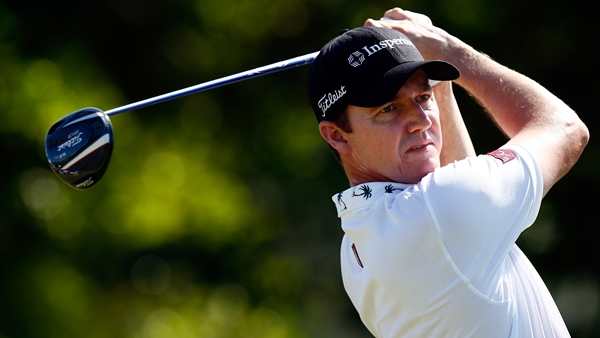 HONOLULU – Jimmy Walker, an astronomy fanatic and now a two-time winner on the PGA Tour, gazed through a glass window across the room to a television that showed his most recent photo of Orion’s Sword.

Walker toiled on the PGA Tour for seven years and 187 tournaments without winning. Now it appears the stars have aligned for him.

That certainly was the case Sunday in the Sony Open.

In a wild final round, where four players were in the mix with an hour to go, Walker followed a clutch par save with three straight birdies to pull away from the pack. He closed with a 7-under 63 for a one-shot victory over Chris Kirk.

And while it’s still only the middle of January, he’s No. 1 in the Ryder Cup standings.

“It took me a long time to do it,” Walker said. “I felt very calm and controlled. That’s what you’ve got to feel and do when it’s time to win. It’s easy to say, hard to do. But today was awesome. Really cool golf.”

Walker’s big run began with a 12-foot par on the 14th hole. One shot behind Harris English, Walker rolled in a 15-foot birdie putt on the 15th hole, and took the outright lead when English _ behind him in the final group _ failed to save par from a bunker.

Walker made a 7-foot birdie putt on the 16th, and then hit 7-iron into 6 feet for birdie on the par-3 17th. A par on the last hole made him wait just a little bit longer.

Kirk had a 30-foot eagle chip from just short of the green on the par-5 18th that would have forced a playoff. It stayed right of the hole, and Kirk made the birdie putt for a 66 to finish alone in second place.

“I feel like I hit the ball well enough to win this week, but it doesn’t always work out that way,” Kirk said.

Jerry Kelly (65) was alone in third. English never recovered from his bogey. He missed birdie putts on the last three holes for a 67.

Walker won the Frys.com Open in October, the first tournament of the new wraparound season. As the first multiple winner for the 2013-14 season, he is leading the FedEx Cup and closing in on cracking the top 30 in the world.

Walker finished at 17-under 263 and earned $1.08 million. He already qualified for his first Masters by winning in October. Now he’s piling up the wins.

“I’ve always felt like I belonged, and you need affirmation every now and then,” he said. “The other win was like, ‘Yeah, OK, I can do it.’ I did it, and I was supposed to be able to do it. Everybody told me I was supposed to do it, and I finally did it. And then it’s, ‘Well, are you going to be the guy that won that you never hear from again?’ It’s nice to get it done and do it again today.”

With so many players in contention, the key was to keep bogeys off the card. Walker had made at least two bogeys in each of the three previous rounds, and it looked as if he was headed for one at the wrong time on the 14th hole when he chipped from an awkward stance near the bunker to about 12 feet. Kelly missed a 15-foot par putt from the same line, and Walker poured it in.

And then, he was off to the races.

Masters champion Adam Scott went out in 30 and was one shot out of the lead just as the final group was starting play. Scott hit too many poor drives to keep it going, and the way the final two groups played the back nine, it wouldn’t have mattered. Scott tied for eighth (seven shots behind), and after a tie for sixth last week at Kapalua, heads into a six-week hibernation before returning to golf in Florida.

The three players with the best shots at winning all won last fall in the early part of the wraparound season _ Kirk at the McGladrey Classic, English in Mexico.

“Guys get into grooves and they’ve all been playing really well,” Walker said. “I think it’s cool. Everybody makes a big deal about being No. 1 on the FedEx and stuff, and it is cool and it is a big deal. … I know it’s January. It’s a long way to September, and every little bit helps.”

Kirk, who had a one-shot lead going into the final round, made birdie on the 17th hole to stay within two shots of the lead and at least entertain the idea of eagle. His approach out of the rough needed about two more hops on the firm turf at Waialae to get on the green.

English ran off two birdies around the turn, took the outright lead with an 8-foot birdie on the 14th, and that was as close as he got.