A late win, a big engagement and Rory McIlroy is ready to start a new year 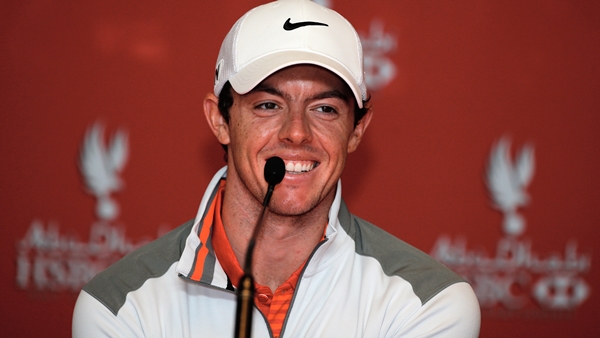 ABU DHABI, United Arab Emirates – Rory McIlroy celebrated his two wins of 2013 in Sydney – a victory in the Australian Open, engagement to tennis star Caroline Wozniacki. Now he returns to golf in the place where his season first began to unravel.

McIlroy, as much as any other player, is eager for a new start.

“I’m not going to sit here and say that all the stuff going on off the golf course wasn’t a distraction and say that it didn’t affect me,” McIlroy said Tuesday at the Abu Dhabi HSBC Golf Championship. “Of course it did. You’re thinking of other things when you really shouldn’t have to.”

He was under severe scrutiny for changing all his equipment at once under a lucrative deal with Nike. The first time played on the weekend was three months into the year at a tournament that had no cut. He walked off one course out of frustration. And he didn’t win until beating Adam Scott on the final hole of the Australian Open.

The upside for McIlroy?

If he’s going to have a year where most of the news is bad, better to get it out of the way when he’s 24.

“It’s great that I’ve went through it at this stage in my career and not 15 years down the line,” he said.

McIlroy was No. 1 in the world when he played Abu Dhabi last year, the start of the European Tour’s swing through the Persian Gulf. Now he’s No. 7, making him the third-ranked player in Abu Dhabi behind Henrik Stenson (No. 3) and Phil Mickelson (No. 5).

Mickelson is playing Abu Dhabi for the first time, and he showed up mostly excited about his new driver from Callaway. Mickelson struggled late last year to find the right driver, and now believes he has one that could lead to the best year of his life.

That season could be made with a sixth major, one in particular – the U.S. Open, the final piece of the career Grand Slam.

“Any major championship win would make the year special and memorable,” said Mickelson, who turns 44 this year. “And I do believe that I’ll win a U.S. Open. I don’t know if it will be at Pinehurst this year – very well could be, or in the future. But I play well in the tournament too often to not believe or be confident in my ability to close the tournament out. But any major championship would make 2014 a remarkable year.”

McIlroy already can claim a remarkable year based on the first day of the year. That’s when he was on a boat in the Sydney Harbor, dropped to a knee and proposed to Wozniacki, his girlfriend of more than two years. Oddly, that was one of the distractions a year ago. Irish papers had them splitting up at least twice.

The 24-year-old from Northern Ireland approached Wozniacki’s parents to ask their permission to marry her.

“I don’t think there can be a bigger decision you have to make than asking someone to marry you,” he said. “If anything, it will only help to have that stability and known everything in that regard in my life is set.