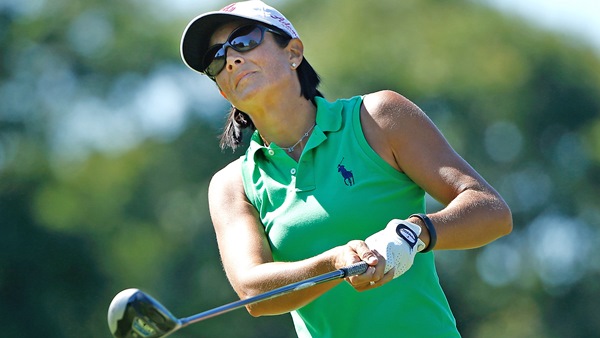 SYLVANIA, Ohio – Laura Diaz got off to a surprising start at the Marathon Classic.

Diaz shot a 9-under 62 for a four-stroke lead in Thursday’s opening round.

U.S. Open champion Michelle Wie shot a 2-over 73, 2008 Marathon winner Paula Creamer was at 72 along with another perennial contender at Highland Meadows, Morgan Pressel.

The defending champion, Spain’s Beatriz Recari, and the world’s No. 1-ranked player, Stacy Lewis, were well down the list at 1 under.

“I definitely didn’t have my best out there,” Lewis said.

“I’m very happy to shoot 62; I would be lying if I said I wasn’t,” she said. “It’s nice to get a good feeling after round one. To see the ball going in the hole, I think that’s always a boost.”

Despite being winless in the past 12 years on the LPGA Tour, she stunned the field by birdieing her first five holes in a round that included nine birdies and no bogeys. She made a 30-footer on her fifth hole, the 14th. Then she stepped back and enjoyed the moment.

“I kind of chuckled to myself – well, out loud,” she said.

She had a chance at tying her career best of six consecutive birdies, but missed a 7-footer on the next hole. She added four more birdies the rest of the way to grab the big lead.

Diaz, who won twice in 2002 and played on four U.S. Solheim Cup teams, has cut back on her competitive schedule in recent years while raising her two young children with her husband, Kevin Diaz.

She hasn’t finished inside the top 25 in a tour event since 2010. But she has regained a bit of her touch the past two outings, tying for 49th at the U.S. Women’s Open at Pinehurst and then tying for 64th in Arkansas the following week. She then took off a few weeks to stay at home, watching her 8-year-old son Cooper’s swim meets.

Daughter Lily, 4, hit the road with mom this week.

“I’ve been playing better this year than I’ve played in the last four years, but I’m still not where I would like to be,” she said. “But it’s going in the right direction.”

Sharing second were second-year pro out of LSU Austin Ernst and Lee-Ann Pace, a South African who has won eight times on the Ladies European Tour.

Leading the group of six players at 67 were Mo Martin and Lydia Ko.

She is still basking in the afterglow of that momentous win.

“I’m pretty tired and it still kind of feels like a dream,” she said. “I was joking around with the trainers, saying, `Can you massage here? Because my face hurts a little bit from smiling.'”

Ko is a two-time winner of the Canadian Women’s Open while an amateur who has already notched her first pro win this year on tour.

Joining Martin and Ko at 4 under were Katie Burnett, Mariajo Uribe, Lindsey Wright and Marissa Steen.

Quebec’s Maude-Aimee LeBlanc was a shot back after a 2-under 69.