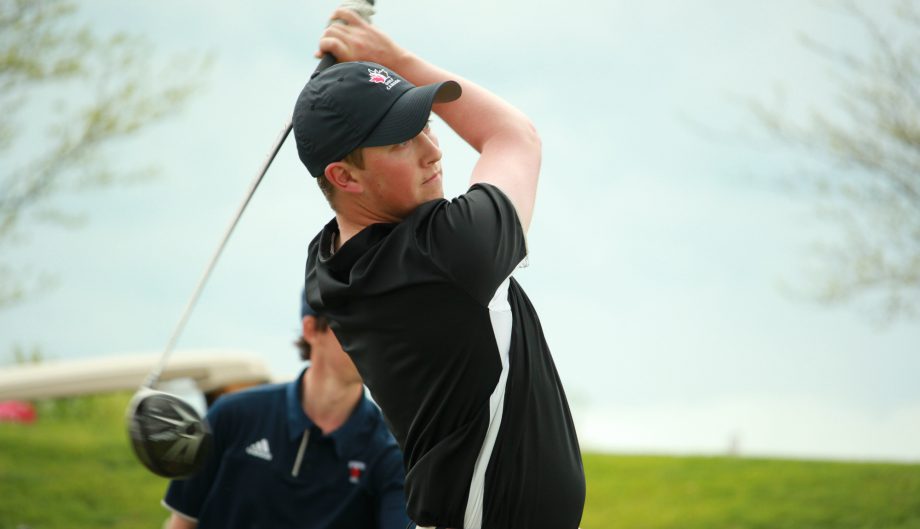 Following consecutive lightning delays in the opening two rounds, the Wilfrid Laurier Golden Hawks jumped out to the lead in the men’s division at 17-over par and the University of British Columbia Thunderbirds held their advantage atop the women’s division at the Canadian University/College Championships at Tangle Creek Golf and Country Club.

On the men’s side, The University of Toronto Blues are second at 24-over par and rounding out the top three is the Université Laval Rouge et Or, who hold the clubhouse lead with a team score of +32. Behind the Rouge et Or are the Western University Mustangs, who are in the clubhouse at 37-over par.

First round individual leader, Eric Flockhart, from Wilfrid Laurier University is still on top. The Mississauga, Ont., product is 1 under par for the tournament through nine holes. He is three shots clear of UBC’s Evan Holmes (+2).

Holmes, the 2015 Individual champion, carded the lowest score of the day among those able to finish with an even-par 71.

“I kept it in front of me off the tee and I didn’t really make any mistakes. I didn’t putt that well today, but I made a few coming down the stretch which was nice,” said the Calgary native. “I felt like it was a pretty good round in the wind all in all.”

“At Tangle Creek, you really have to get it in play off the tee. The greens are so severe that you also have to be good with your second shots. If you’re on the wrong spot on the green you’re three putting,” said Holmes.

18-hole leader and defending champion Kat Kennedy, from the University of British Columbia, is in first at 4 over par through nine holes.

The University of Fraser Valley’s Sharon Park is four strokes back at +8. Rounding out the top three are Victoria Vikes teammates Hannah Diamond and Laura Ferreira, who sit at +11.

No women’s teams finished their second round; play is set to resume Wednesday morning at 7:30 a.m.

Due to the weather delays, the groups will not be re-ordered after 36 holes. The pairings will be the same as Monday’s draw. After the third round the top-10 men’s teams and the top six women’s teams will advance to the final round.