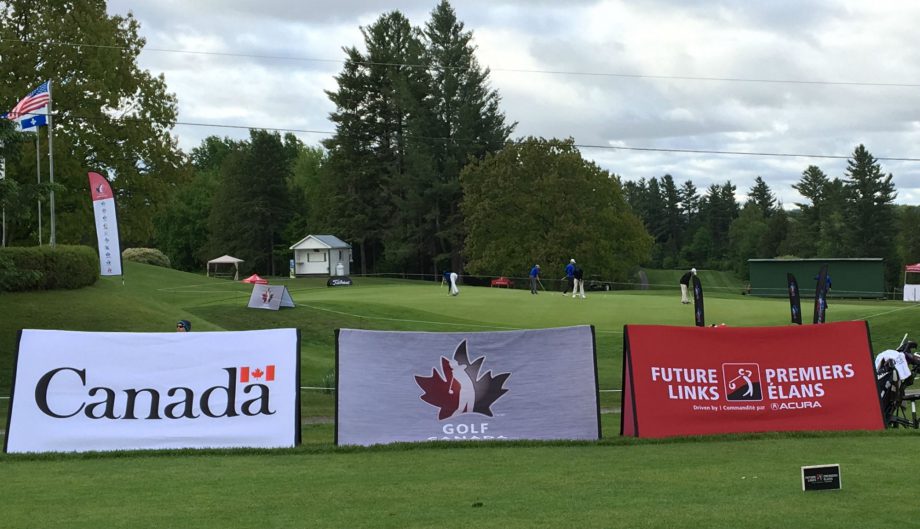 SHERBROOKE, Que. – Jeffrey Lebeau and William Duquette sit deadlocked in the boy’s division after round one at the Future Links, driven by Acura Quebec Championship on Friday, while Céleste Dao holds the lead in the girl’s division.

Lebeau and Duquette both sit tied at the top of the leaderboard after matching 2-under-par 71 rounds. Lebeau, who is from Sherbrooke Que., and is playing on his home course, was off to a fantastic start after heading to the final three holes bogey-free and 4 under, but he stumbled down the stretch with bogeys on 16 and 18.

“It’s my home course and I’ve played it a lot this week,” said Lebeau, after his round. “Even though the course was wet, the ball rolled really well. I thought I was going to get some tougher lies in some places, but I was surprised that the course played really nicely.”

Duquette, from Laval, Que., played a consistent game all day and carded two birdies and a bogey on each the front and back nine.

Antoine Roy was the only other player in the boy’s division to record a score under par after his 72 found him one back from the leaders. The product from Rimouski, Que., headed to the 16th hole 2 under but dropped a shot on the par 3.

Outside the top three there are currently seven players tied with even-par rounds.

Sitting back of the pack at T15 (+2) is 15-year-old Christopher Vandette from Beaconsfield, Que., who is fresh off a victory at the Future Links, driven by Acura Ontario Championship last weekend.

In the girl’s division, Dao shot the low-round of the day after her 3-under-par 70. The 16-year-old recorded only one bogey on Thursday and is the round one leader for the second consecutive Future Links, driven by Acura Championship.

“I was hitting the ball very good and putting well,” said Dao. “The only thing that didn’t go so good in the start was my driving. The course played very nicely and it was very scorable. I could get to a lot of the par 5’s in two and the course was rolling really good.”

Ellie Szeryk, from London, Ont., and Haley Yerxa, from Ottawa Ont., are both tied in second, four strokes behind Dao. Szeryk made the turn 3 over par but rattled off four birdies in five holes to bring her into contention, and Yerxa’s eagle on hole 15 helped her finish the day 1 over par.

Click here for more information and here for results.