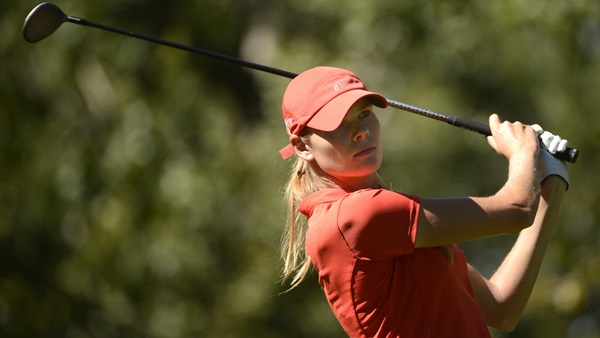 LAKE WALES, Florida – In her first Symetra Tour event of the season, Canada’s Maude-Aimée LeBlanc fired a 5-under-par 67 Friday to take a two-stroke lead after the first-round of the Florida’s Natural Charity Classic.

LeBlanc’s round started as good as she could have asked with an eagle on the par-5 tenth hole.  She birdied the 13th hole and made the turn at 3-under.

On the front nine, she birdied three of her first six holes.  After a bogey on the seventh hole, she concluded her round with a birdie on the par-5 ninth hole.

“I stroked the ball really well today,” said 25-year-old LeBlanc.  “It was a little windy, so that was tricky and some pins were tough to get close and I was struggling a little with the speed of the greens, but I stayed patient and made some good rolls and I played well.”

On her final hole, a par-5, LeBlanc took advantage of the downwind and had a 5-iron into the green.  She wound up in the green side bunker, but hit a great bunker shot to end her round with a birdie.

“I hit my bunker shot to about a foot and was able to make the putt so it was definitely a nice way to finish,” said LeBlanc with a wide smile.  “I’m definitely looking forward to coming back tomorrow.”

LeBlanc has a two-stroke lead over a pair of Americans – Ginger Howard and Kendall Dye – who both shot 3-under 69.

“It’s always nice to be in contention, that is what everybody is working to do,” said the Sherbrooke, Que. native.  “I’m going to stay with the same plan tomorrow and Sunday, I’ll be patient and I’m going to try to make some putts.”

LeBlanc played in the first two LPGA events of the season.  She missed the cut at the Pure Silk Bahamas LPGA Classic and the ISPS Handa Women’s Australian Open.  The event in Australia, which was held from February 12-16, was the last time Leblanc played competitive golf.

“I worked on my swing and got some new clubs and that really made a big difference,” said LeBlanc.  “Just been playing well for the last couple of weeks and I’m glad it showed here today.”