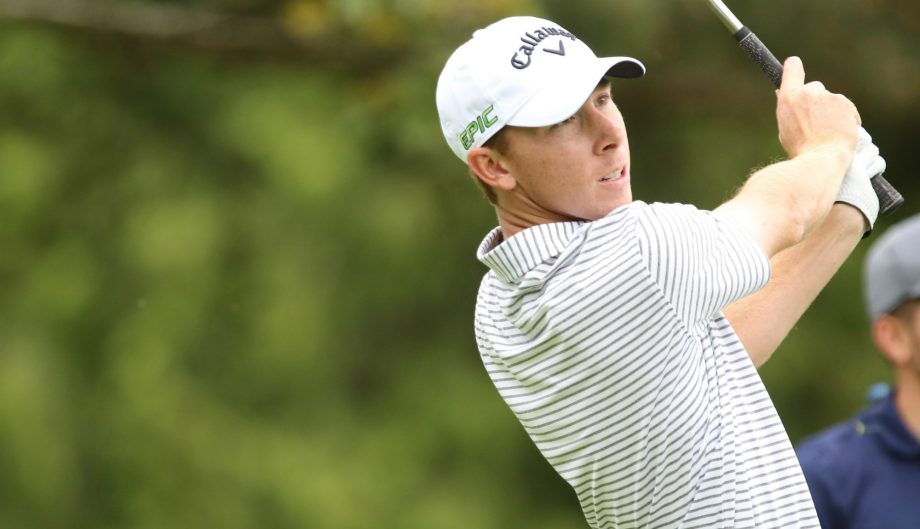 Tampa, Florida’s Lee McCoy surged up the leaderboard at the Freedom 55 Financial Open on Saturday, shooting a 5-under 67 at Point Grey Golf and Country Club to take the 54-hole lead at the first event of the 2017 Mackenzie Tour – PGA TOUR Canada season.

“It’s always nice when the leaders come back to you a little bit, but that’s totally out of my control and it was a nice little surprise when I was starting to see the leaderboards late in the round,” said McCoy, who steadily made his move with six birdies against a single bogey on the day.

McCoy, who made headlines when he finished fourth as an amateur at the 2016 Valspar Championship on the PGA TOUR, was boosted by a comfortable pairing with friend and fellow Mackenzie Tour rookie Jordan Niebrugge.

“We were Walker Cup teammates and Palmer Cup teammates, and we played a lot in college together. We’re going down to U.S. Open Sectionals together and then driving up to the next event, and we’ll be spending plenty of time,” said McCoy of Niebrugge, who was tied for third at 10-under after a 71.

“I was hoping he was going to make that birdie putt on the last hole and we’d get paired together again.”

Niebrugge, from Mequon, Wisconsin, shared third place with Costa Mesa, California’s Jake Knapp, who had a 68.

After concluding a brilliant amateur career last year, McCoy looked primed to head straight to the Web.com Tour and was preparing to compete at the Second Stage of Q-School when disaster struck.

He had just finished T41 while playing on a Sponsor Exemption at the PGA TOUR’s Shriners Hospitals for Children Open, but got into a car accident on the way to the course, fracturing his wrist in two places and ending his season.

“To sit at home and know that my game just disappeared in the matter of two or three seconds was really tough,” said McCoy, who was fortunate to avoid surgery, instead wearing a cast for two months.

“It was tough because my game was really starting to come back around at that point. I had just made a cut at the Shriners the week before I had my car accident. I was heading to Second Stage, and I had already figured in my mind that I was headed to the Web.com Tour,” said McCoy.

Now, with a clean bill of health and his game firing on all cylinders, the Georgia alum looks to make the first step back towards the Web.com Tour with a win this week in Vancouver.

“Once I got the cast off after two months, it was pretty easy. I did therapy for like two weeks, and right now it feels like I never broke it, so it’s a total, 100 per cent non-issue. I’m really lucky to not have had surgery or anything like that,” said McCoy.

McCoy was an NCAA All-America selection three times at Georgia, including 1st team selections in his junior and senior seasons. He represented the United States at the Walker Cup in 2015.