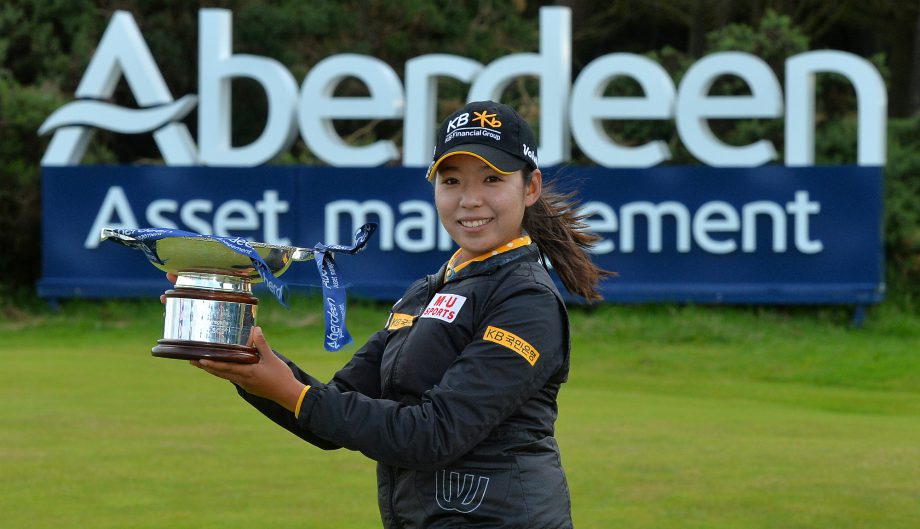 “I didn’t believe I got a win today,” said Lee, six shots back entering the round. “It was a really surprise for me.”

A stroke ahead of Lee with two holes left at chilly Dundonald Links, Webb dropped a shot back with the double bogey on the par-5 17th after driving into a bunker and having to play out backward.

“I bent down, picked my tee up – thought I hit a perfect drive there,” Webb said. “When I stood up, I went to tell (my caddie) Jonny (Scott) that I absolutely knotted my 3-wood exactly how I wanted and he said it kicked into the bunker. I have no idea how it did that.”

Lee, playing in the group ahead of Webb, increased the margin to two with a birdie on the par-5 18th. Needing an eagle to force a playoff, Webb closed with a birdie to tie for second with Mi Jung Hur.

Webb didn’t know she was two strokes behind because of the lack of a leaderboard on the final hole in the tuneup event for the Ricoh Women’s British Open next week at Kingsbarns.

“It’s pretty bad to not have a leaderboard on the last,” Webb said. “That’s the first time I’ve ever been (at a tour event) that hasn’t had a leaderboard on 18. … We didn’t know if Mi Hyang had birdied or not, because there wasn’t like a loud cheer like she had.”

The 42-year-old Australian reached the greenside bunker in two shots.

“Well, my bunker shot, I said to Jonny, ‘I don’t know if I need to hole this or get it up-and-down,”’ Webb said. “Imagine if you went for it and overplayed it and you only had to get it up-and-down. I was trying to make it but also not being overly aggressive.”

Lee shot a 6-under 66 to finish at 6-under 282. After playing the front nine in 5-under 31 with six birdies and a bogey, the South Korean player made eight straight pars before birdieing the last. She also was confused on 18 without a leaderboard, thinking she needed to an eagle to tie Webb.

“I thought she’s going to win, so just I want to make the eagle,” Lee said.

“Very gutted,” Webb said. “I was on a high, making the eagle, and then I had a very nice up-and-down on the next. Obviously, there were nerves there, but there was a good calmness there.”

She won the last of her 41 LPGA Tour titles in 2014 at the Founders Cup in Phoenix.

The LPGA Tour sanctioned the event for the first time, teaming with the Ladies European Tour.

“It was really good practice for the British,” Lee said. “I take a lot of confidence from this win.”