Lefty looking for magic Nicklaus used to win Masters at 46 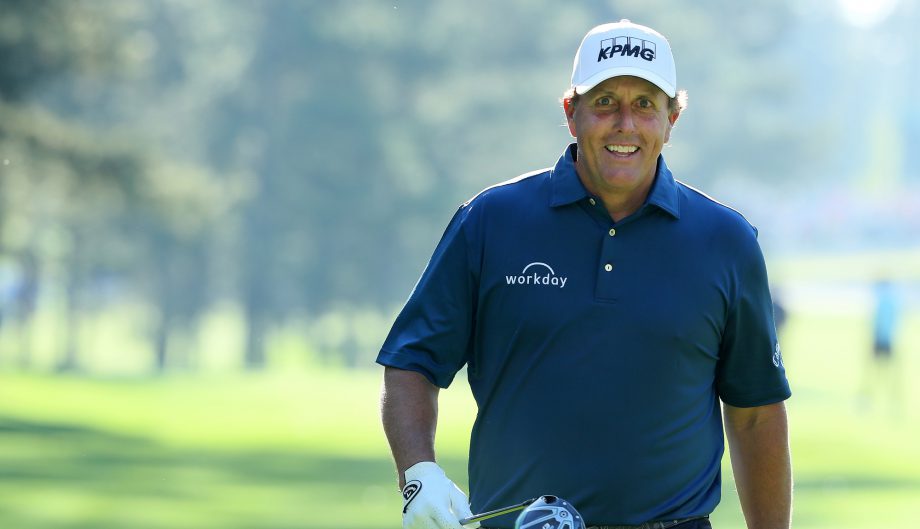 AUGUSTA, Ga. – Jack Nicklaus compared his sixth and last Masters title at age 46 to catching lightning in a bottle. If Phil Mickelson has his way, he’ll put an end to the myth that lightning never strikes the same place twice.

“I don’t think much about age right now,” said Mickelson, a three-time Masters champion who turns 47 in June. “I think that guys’ careers are being extended a lot longer because of the way fitness has taken over.

“And it’s not like I’m a pillar of fitness,” he chuckled, “but I spend a decent enough time to be able to physically perform and practice and play the way I’d like to play. You look at guys like (59-year-old) Bernhard Langer who was in the second-to-last group last year – I don’t feel as though age is as big a factor as it was decades ago.”

No less an authority than Nicklaus himself believes Lefty may be onto something.

“Phil is far better prepared than I (was). I don’t think he’s probably playing his best golf right now but sometimes that changes very quickly,” Nicklaus said. “Honestly, age is not an issue to him. He’s a big guy and he’s a long guy and he’s got a great short game. I wouldn’t be a bit surprised to find him in contention.”

One other thing tilting in Mickelson’s favour is the weather. Overcast skies and winds gusting up to 40 mph are forecast for the first two rounds.

“That’s going to magnify the misses for a lot of players, which means that you need to miss it in the correct spots,” Mickelson said. “Even though you might miss it big, if you’re in the right spot, you can take advantage of your short game and salvage a lot of pars … where players less experienced with the golf course will possibly miss it in the wrong spots and shoot themselves out.”

Mickelson might have included himself in that last group a dozen years ago, when he wore the “best-player-never-to-win-a-major” label like a scarlet letter. But after going 0 for 42 in the biggest events of an otherwise successful career, his breakthrough win came at Augusta National in 2004. Now, he’s viewed by the up-and-coming generation as one of the game’s wise, old heads with five majors in the trophy case.

What hasn’t changed is Mickelson’s desire .

“I think the last year and a half, I’ve worked really hard to get my game back to the level that I expect and the level that I’ve strived for,” he said. “If I can play anywhere close to the way I played at the British Open last year and the Ryder Cup, I should be able to give myself a good opportunity for Sunday.”

Those preparations may have been hampered by Mickelson’s ties to renowned Las Vegas sports gambler and golf hustler Billy Walters, who is facing multiple counts of securities fraud in federal court. Prosecutors contend Walters received inside information from a former Dean Foods executive and passed it along to Mickelson before the golfer purchased nearly 200,000 shares of the company’s stock on consecutive days in July 2012.

Mickelson made a $930,000 profit selling the stock a week later, prosecutors alleged, a sum he’s agreed to pay back with interest. According to the New York Post, court documents also revealed that Mickelson paid a gambling debt of nearly $2 million to Walters.

Mickelson has not been charged and was listed as a witness for the defence. He has said he will not be called to testify. Walters has denied any wrongdoing, and his lawyer told the court that if called, Mickelson would invoke his Fifth Amendment right against self-incrimination.

Mickelson wasn’t asked directly about the trial at the beginning of what will be his 25th appearance at the Masters. But his answer to a question about “compartmentalizing things happening off thegolf course” hinted at how he handles similar situations.

“The great thing about golf is that to be successful and to play a good round, you have to really dive in mentally, physically, and be committed to each shot, to the round, and it takes your focus away from anything else that might be going on,” Mickelson said. “So if you are going through a tough time, golf is a great place to be, because it allows you the freedom to focus on what you want to do at hand and it’s a real positive.

“I love everything about my job,” he added, “and that’s just another thing that I love about it.”