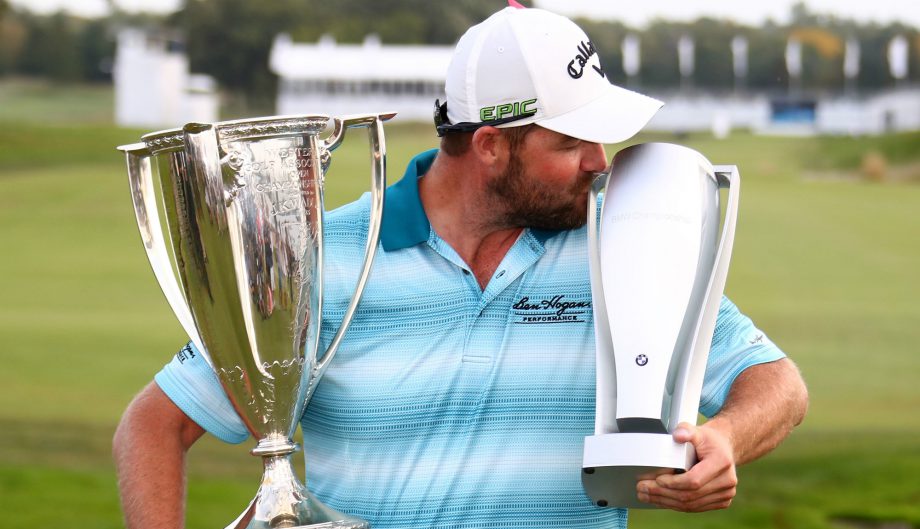 LAKE FOREST, Ill. – The clutch shots down the stretch in the BMW Championship belonged to everyone except the winner.

Staked to a five-shot lead, and determined to not let another FedEx Cup playoff event get away from him. Leishman never gave anyone much of a chance Sunday at Conway Farms. And when Justin Rose made a late run and closed within two shots, Leishman made back-to-back birdies to put away the final challenge, and then added one more for a 4-under 67 to set the tournament scoring record.

Leishman went wire-to-wire for the first time on the PGA Tour. The Australian moved up to No. 4 in the FedEx Cup, giving him a clear shot at the $10 million bonus next week. He moved into the top 15 in the world.

But this mainly was about redemption for losing a two-shot lead on the back nine at the TPC Boston two weeks ago.

“When the pressure got put on that back nine by Rosie, I reacted with birdies,” Leishman said. “Didn’t get too worried. Just tried to keep doing my own thing and give myself chances. … Backing up what happened (in Boston) was probably the most satisfying thing for me. I was just really determined to not let that happen again.”

Leishman finished at 23-under 261, breaking the 72-hole tournament record that Tiger Woods set at Cog Hill in 2007.

Rose ran out of hope when he made bogey on the par-3 17th and closed with a 65. Rickie Fowler ran off three straight birdies only after he was too far back and shot 67. They finished five shots behind.

Fowler needed a birdie on the par-5 18th to grab the No. 5 seed for the FedEx Cup finale next week at the Tour Championship. He ripped driver off the fairway and over the stream to the back rough. It was a bold play that preceded a pair of meagre efforts – a chip that came up 25 feet short, and a birdie putt that didn’t to the hole.

Jon Rahm birdied four of his last five holes for a 67 and will be the No. 5 seed.

Jordan Spieth shot 65 to tie for seventh and kept the No. 1 seed, followed by Justin Thomas, Dustin Johnson, Leishman and Rahm. The points are reset to give all 30 players at East Lake a mathematical chance, but the top five seeds only have to win the Tour Championship to capture the FedEx Cup.

Adam Hadwin of Abbotsford, B.C., shot up the leaderboard after shooting a 65 to finish as the low Canadian at 7 under. Mackenzie Hughes of Dundas, Ont., struggled to a 3-over 74 and was 6 under for the event.

As usual, the only drama at Conway Farms was who made it to East Lake, and a pair of PGA Tour rookies delivered.

Xander Schauffele, who won The Greenbrier Classic in July, opened with 10 pars and two bogeys and was not even in the picture until the San Diego native played his final six holes in 6-under par, including a 30-foot eagle when he drove the green on the par-4 15th.

“A dream year for me,” Schauffele said. “Pretty much every goal I came up with and I’ve got to start creating some new ones.”

Patrick Cantlay fell out of the top 30 when he took bogey on the 16th hole. Needing a birdie to get into the Tour Championship, he hit a hybrid onto the green to 50 feet, left his eagle attempt some 10 feet short and calmly holed the putt to get in.

Cantlay returned to golf after a three-year break from a back injury that nearly ended his career, and the death of his close friend and caddie, Chris Roth, who was hit by car as they walked to dinner. The former UCLA star made it to the Tour Championship despite playing only 11 events this year. Being in the top 30 gets him into the Masters, U.S. Open and British Open next year.

Tony Finau wasn’t sure what he needed, but he knew a bogey wasn’t going to help and he was nestled in the rough behind the green after his third shot. Finau, No. 39 in the standings, chipped in for birdie and a 64 and moved into the top 30.

“To see it go in was … man, the feeling that I have is pretty fantastic,” Finau said.

Masters champion Sergio Garcia injected more drama than necessary. He figured he needed a par on the final hole to get into the top 30 when a bogey would have worked. His second shot was on the rocks in the stream, and after taking close to 30 minutes on a drop, he smacked it over the green into the grandstand, got more relief, and then got up-and-down for his par.

Phil Mickelson wasn’t so fortunate. He made three bogeys on the front nine and tried to get back in the game with an eagle on the reachable par-4 15th. Needing an eagle on the 18th hole to make it to East Lake, Mickelson’s 140-foot pitch-and-run hit the hole and popped out. After the 30-minute wait on Garcia.

Leishman won the Arnold Palmer Invitational in March at Bay Hill. The third victory of his tour career was by far the biggest, and went far beyond the strong field, the $1,575,000 paycheque or his standing in the FedEx Cup.

Leishman pegged this event as a chance to spread awareness for sepsis and toxic shock syndrome, which nearly killed his wife two years ago. He asked the players to wear ribbons on their caps this week to celebration Sepsis Awareness Month. And then he went wire-to-wire, walking off the 18th green to see his wife, Audrey, and their three young children.