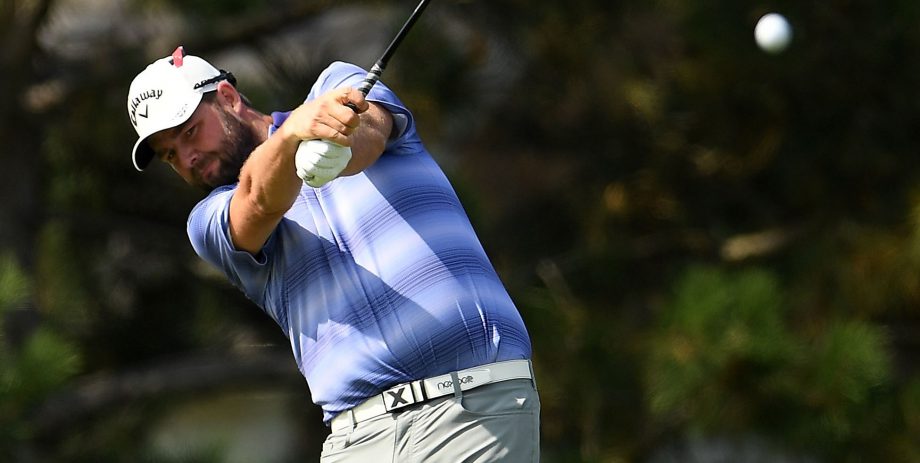 LAKE FOREST, Ill. – Marc Leishman has a short memory when it comes to golf, which only helped him at the BMW Championship.

He forgot all about that 62 in the opening round.

He was nearly just as good Friday with a 7-under 64 to open a three-shot lead over Jason Day and Rickie Fowler going into the weekend at Conway Farms.

“I really took that as a challenge today, to not take it for granted that you’re just going to make birdies,” Leishman said. “You still have to earn every birdie. I think when you do get ahead of yourself, that’s when bad stuff can happen.”

There was plenty of good stuff from the guys chasing him in the third FedEx Cup playoff event.

Day, who has gone 16 months since his last victory, chipped in from behind the 14th green for his second eagle of the week, and then added a third eagle with one swing. He made a hole-in-one on the 17th hole with a 7-iron that turned into a payoff for multiple parties.

It carried day to a 65, putting him in the last group on the weekend with Leishman. BMW awarded $100,000 to the Evans Scholars Foundation, and then Day decided to give the car he won to the Evans Scholars, which will yield another full, four-year scholarship for another student.

Fowler also chipped in for eagle on the reachable par-4 15th hole on his way to a 64.

“The ultimate goal is to win this week,” Day said. “That’s the thing I’ve been trying to do this whole season – at least win once, and try to build on that.”

Leishman was at 16-under 126, two short of the 36-hole record Day set at Conway Farms two years ago on his way to a wire-to-wire, six-shot victory. Leishman has some experience with that, but it was long ago and the memory is vague, naturally. He recalls opening with a 70 at the Toyota Southern Classic on the Von Nida Tour in Australia and winning big.

He already has 18 birdies in 36 holes at Conway Farms, where the scoring average was a shade under 69 through two rounds.

It hasn’t been easy for everyone, particularly defending champion Dustin Johnson. The world’s No. 1 player can’ seem to buy a putt, and even when he started to make a little progress, he finished bogey-bogey by taking two chips to get on the 17th green and hitting into the water on the 18th.

Patrick Cantlay extended his remarkable run this season with a 65, leaving him alone in fourth place but six shots behind. Cantlay returned after three years away to cope with a severe back injury and the death of his close friend and caddie, Chris Roth, who was hit by a car as they were walking to dinner.

Cantlay is playing his 11th tournament this year, yet he is No. 41 in the FedEx Cup and could get into the Tour Championship if he finishes in the top 30 after this week. Phil Mickelson is trying to work his way into the top 30, and while he sputtered with two birdies, two bogeys and too many pars, he drilled an approach to 5 feet on the par-5 14th for an eagle. He shot 69 and was at 7-under 135, in a tie for 12th.

Jordan Spieth, No. 1 in the FedEx Cup after successive runner-up finishes in the playoff events, only managed a 70 and joined Mickelson in the group at 135.

Mackenzie Hughes of Dundas, Ont., is tied for 12th at 7 under after shooting a 68. Adam Hadwin of Abbotsford, B.C., shot his second-straight 71 and is even for the event.

Leishman is hitting his stride at just the right time. Two weeks ago at the TPC Boston, he took a two-shot lead into the back nine only to get passed by Justin Thomas and Spieth by shooting 40 on the back nine to finish third behind Thomas.

After a week at home in Virginia, with the clubs never leaving the garage, he picked up where he left off.

It’s easy to overlook Leishman because the Australian has only two PGA Tour victories, including the Arnold Palmer Invitational earlier this year. He’s OK with that, and laughs at hearing fans whisper as he walks by, “Who’s that bloke?” That was his phrase, though apparently he’s heard it Down Under, too.

As for that short memory, he does have some specific recall of tournaments long ago.

One of them was eight years ago in the Chicago area. It was his rookie season on the PGA Tour. He made an eagle on the 18th hole at the TPC Boston just to advance to the third round at No. 67. Then, he was paired with Tiger Woods in the final round at Cog Hill.

“I remember being really, really nervous on the first tee, which I’m generally not a nervous person, but that was a new thing for me,” he said.

He also remembers having an eagle putt on the ninth hole, with Woods well to the right off the tee and then stuck behind a tree. Woods hit a 9-iron out of trouble and ended up making birdie, and he went on to win by eight shots.