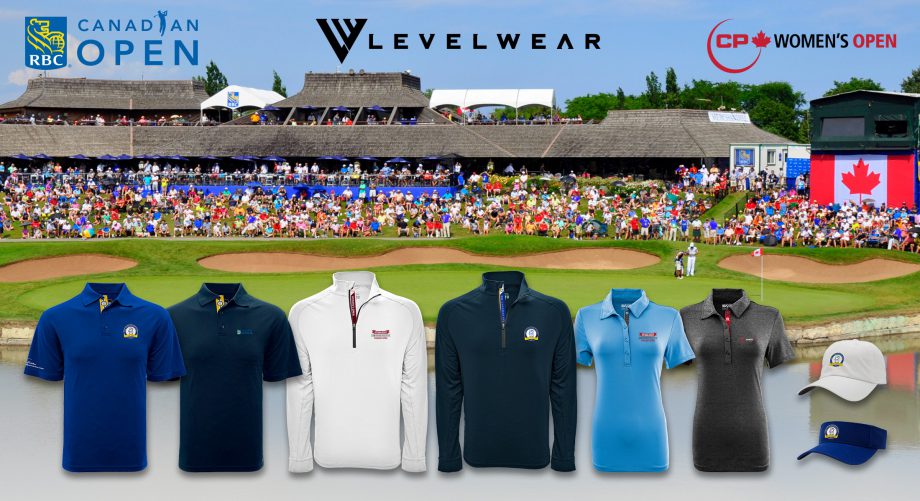 Toronto, Ontario – Levelwear, a global sport and lifestyle apparel brand, announced today it has been named official golf apparel and headwear sponsor of the RBC Canadian Open and the CP Women’s Open, beginning with the 2017 Championships.

Sponsoring both of Canada’s National Open Golf Championships, Levelwear deepens its presence in the golf industry in Canada and provides a platform to demonstrate the company’s golf and licensing apparel expertise.

Levelwear becomes the exclusive provider of RBC Canadian Open and CP Women’s Open volunteer uniforms as well as branded apparel and headwear both on the event grounds and at select off-site retail locations. The product offering will include its polos, mid-layer and lightweight outerwear garments, as well as pieces from their lifestyle collection of casual cottons and their wide assortment of premium headwear. Known for innovative design and treatment, each piece of apparel will be carefully crafted by the Levelwear in-house design team to create memorable pieces of commemorative merchandise for the spectators and fans.

Levelwear’s investment in these two quintessential properties further enhances its commitment within the golf marketplace in Canada. In January, Levelwear signed ‘Mr. Northern 59,’ Adam Hadwin as a global brand ambassador for its golf and lifestyle apparel. In addition, Levelwear also sponsors fellow PGA TOUR member and Canadian, Brad Fritsch as a Global Brand Ambassador. Levelwear has established business relationships with roughly 80 of the top 100 golf courses in both Canada and the U.S.

The RBC Canadian Open is the third-oldest national open golf Championship next to the British Open and the U.S. Open. Golf Canada will also be bringing the CP Women’s Open back to the nation’s capital in Ottawa to coincide with Canada’s 150th birthday celebrations.

“We have a deep heritage in golf and in Canada. These are the two most iconic golf Championships in Canada. With the history, heritage and connection these properties have with golf fans, we are excited to leverage that equity to build some truly unique Levelwear offerings,” stated Hilton Ngo, President of Levelwear.

“We are extremely excited to have Levelwear as our new apparel and headwear partner this upcoming season,” said Brent McLaughlin, Tournament Director for the RBC Canadian Open and CP Women’s Open.  “Levelwear’s depth of innovation, decoration and service will be able to provide consumers with quality licensed merchandise to commemorate Canada’s most historic golf championships.”

Levelwear holds licensing partnerships with some of the top global brands, including the NHL and NHLPA, NBA, 150 US Colleges, the CFL, Hockey Canada and various soccer properties globally. At the PGA Show in Orlando, Levelwear unveiled its fall 2017 collection featuring a new women’s transitional activewear line –  Levelwear Verve, a modern collection of men’s polos, and the Insignia Program, a highly innovative logo treatment collection, that gives a rich gloss metallic like finish with custom embellishments. For more information, please visit www.levelwear.com.