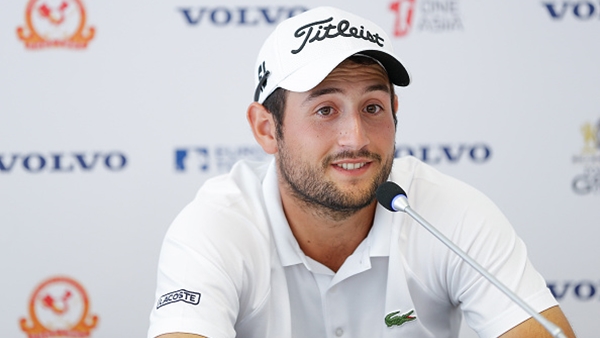 SHANGHAI – Defending champion Alexander Levy could do little wrong as he opened his third round at the Volvo China Open on Saturday with four straight birdies, including a magnificent putt from 50 feet away.

Then, just as quickly as his birdie run began, mistakes – and self-doubt – started to enter the Frenchman’s game.

Levy carded three bogeys and failed to sink another birdie as David Howell and the Chinese pair of Li Haotong and Wu Ashun caught him in the lead at 8-under 208 going into the final round.

“On the back nine, I was a little bit nervous,” Levy said. “I was aggressive on my putt and I make a few mistakes.”

Levy is aiming to be the first repeat champion in the 20-year history of the China Open.

The Frenchman started the day a stroke behind countryman Julien Quesne, but quickly erased the deficit with a quick birdie on the first hole. Then came a three-foot birdie putt on No. 2, the curling 50-footer on No. 3, and a 10-foot putt that rattled into the hole on No. 4, putting him two strokes up on the field.

There were plenty of smiles after that from the affable Levy, even when he narrowly missed several other birdie chances and drove his tee shot to the right of the fairway on the 12th. His mood darkened, however, after back-to-back bogeys on Nos. 14 and 15 dropped him back into a share of the lead.

Levy said his confidence began to waver because he’s coming off a particularly rough three-month stretch that saw him miss out on his first chance to play the Masters. He’s hoping he can put those feelings behind him on Sunday.

“It’s nice to play for the win and tomorrow I’m in a good position,” he said.

Howell has been in this position before, too. In fact, the biggest victory of his career came 10 years ago in Shanghai when he outdueled Tiger Woods in the final round to win the HSBC Champions.

“I was thinking my way around (today) when I won in China for the first time, obviously in the company of Tiger, so if you can do that, then you can certainly handle the pace,” Howell said.

It’s been two years since Howell’s last victory on the European Tour, but the 39-year-old Englishman put together a solid round on Saturday, making five birdies in a seven-hole stretch to shoot a 68 and vault into a share of the lead.

His final 30-foot birdie putt on the 18th was on target, as well, but he hit it too hard and it lipped out.

“I thought it was a slow putt, turns out it was a fast putt, and it rammed into the hole there,” Howell said.

Howell and Levy will have to contend with a partisan crowd at Tomson Golf Course on Sunday with the two Chinese players also tied for the top spot after both shot 69 on Saturday. Levy will be paired with Wu, and Howell will play with Li in the final pairing.

It’s been an excellent couple of weeks for Chinese golf. Li was runner-up last week at the Shenzhen International, falling just short to Kiradech Aphibarnrat in a playoff, and his compatriot Huang Wenyi finished tied for fourth – the first time in European Tour history that two Chinese golfers were in the top 10 at the same event.

It could happen again this week.

Wu is playing in his first event since November after taking a few months off to tweak his swing. The 29-year-old Wu, who has never captured a European Tour event, said the decision had paid off.

Li is being touted as a future golf star for China. The 19-year-old is already the highest-ranked Chinese golfer at No. 125, just 19 spots below Woods, and last fall he earned his card to play on the U.S. Web.com Tour. Then came his near-breakthrough win on the European Tour in Shenzhen.

“Last week, a lot of people watch me and I enjoy this feeling,” he said. “I’m getting a lot of experience with my golf. I’m just enjoying it.”