Lewis takes an early lead at Pinehurst with a 67 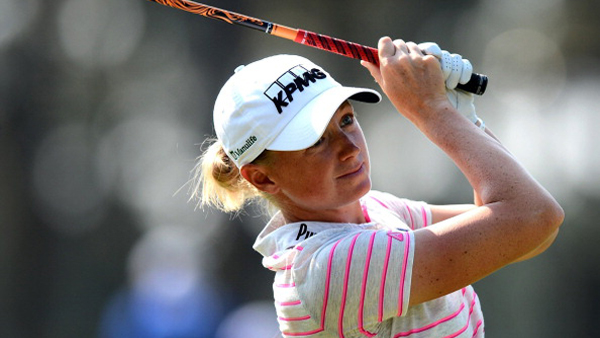 PINEHURST, N.C. – Just over 1,000 yards shorter didn’t make Pinehurst No. 2 feel any easier in the U.S. Women’s Open on Thursday.

Except for Stacy Lewis.

The top-ranked Lewis took note of how Martin Kaymer won the U.S. Open last week and took a small step in that direction. She had a 3-under 67 in the morning and built a two-shot lead among the early starters on a blistering day in the North Carolina sandhills.

Kaymer also opened with a bogey-free round (65) and went wire-to-wire for an eight-shot victory.

“It was such an easy day,” Lewis said, speaking of the stress-free round more than the golf course. “I played really, really solid, other that I had to make a few par putts. But other than that, I didn’t put myself in too bad of spots and made a few birdies.”

Lucy Li, the 11-year-old who is the youngest qualifier in Women’s Open history, had a triple bogey and two double bogeys that ruined an otherwise solid round. She shot 78 and was 11 shots behind, likely needing a round in the 60s to have any chance of making the cut.

“Getting to play in the U.S. Open was a lot of fun,” Li said. “I learned that you’ve got to be patient. One shot at a time. Try to get rid of the big numbers.”

More than the biggest event in women’s golf, it’s also a grand experiment for the USGA. This is the first time the U.S. Open and U.S. Women’s Open have been played on the same course in back-to-back weeks.

The course measured 6,296 yards – 1,064 yards shorter than the opening round for the men – though there were plenty of indications that it was equally tough. The early part of the first round for the men was played under cloud cover, making Pinehurst feel soft. The sun already was broiling, with more wind, on this day.

Only two other players from the morning group broke par. Former Women’s Open champion So Yeon Ryu and Katherine Kirk each had a 69.

Lewis didn’t come to Pinehurst early to watch the final round of the men’s Open, instead seeing the course for a practice round a few weeks ago.

“It was cool to see the plan I had laid out in my head. He was kind of doing the same thing,” said Lewis, a two-time winner in her last five tour starts. “So it was nice coming into the week knowing that y plan as going to work on this golf course. I thought that somebody, like the guys, can run away with this. If you’re hitting the ball well enough, you can definitely run away with it. At the same time, you have to know par is a good number and keep grinding away.”

Other players were headed in the wrong direction.

Defending champion Inbee Park shot a 76, her highest open-round score in this event since her debut as a 16-year-old in 2004. Jessica Korda, a two-time winner on the LPGA Tour this year, had a 79.

There were 11 rounds in the 80s among the 78 players who went early.

Amateur Brooke Henderson of Smiths Falls, Ont. had the lead early in the day and continues to develop her confidence at LPGA events.

“Yeah, there definitely are some nerves out there, especially on the first tee,” said the 16-year old. “Everybody gets those… But I’ve definitely become a lot more comfortable the last couple of LPGA events that I played in. I’m getting to know the pros a little bit more, getting to know where my game is compared to theirs, which is definitely exciting and hopefully in the future I’ll play against them a little bit more.”

“It was pretty cool being up there, closer to the top of the leaderboard,” she added. “It was definitely fun and hopefully I’ll put a good round together tomorrow and make the cut and then hopefully climb up the leaderboard on the weekend.”