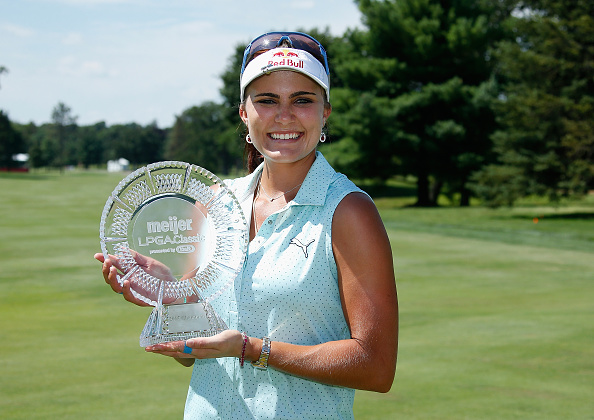 BELMONT, Mich. – Lexi Thompson made sure she didn’t beat herself – and ended up defeating everyone else.

The 20-year-old Florida player closed with a 6-under 65 at Blythefield Country Club for her fifth LPGA Tour victory. She won for the first time since the then-Kraft Nabisco Championship last year.

“I actually said when I was on 10 that my goal was to get to 20-under,” Thompson said. “I didn’t get it up to that, but I was just trying to focus on my own game, focus on my pre-shot routine and having fun in between shots. I think that’s what helped me.”

Lizette Salas, four strokes ahead after the third round, tied for second with Gerina Piller. Salas finished with a 70, and Piller had a 64.

Thompson birdied Nos. 1, 4, 5 and 7 to catch Salas. Piller made five birdies on the front nine, with her birdie at No. 8 briefly tying her for the lead with Thompson and Salas.

But Thompson, ranked seventh on the tour in average driving distance and greens in regulation, kept bombing drives, spinning wedge shots and making putts. A 6-footer for birdie off a wedge to the back pin on the 400-yard, par-4 16th put her three shots in front.

Thompson created some drama when she missed the green at No. 17 and rimmed a 4-foot par putt. She caught a good bounce off a tree down the right side of No. 18 on her tee shot, ripped a shot from the rough to the middle of the green and two-putted for a winning par.

“I called my caddie over and I told him to give me something to think about to get my mind off it,” she said about the first putt on 18. “He just said something so random, like, food. And I’m like, of course. But it kept me relaxed and got me laughing and it helped me go into that putt confident.”

Thompson worked in the offseason with John Denney, a Jupiter, Florida, performance coach who specializes in the mental side of golf.

“That has helped me tremendously just to relax and have fun instead of just grinding 24-7 on the golf course,” she said.

Piller had hit all 15 greens and was 7 under for the round when she missed the green at No. 16 with tree troubles on the left side of the par 4. She made bogey for the first time. A 7-footer for birdie at No. 18 left her one shot behind.

“I knew it was going to take a great day and I gave it a run,” said Piller, whose husband, Web.com Tour player Martin Piller, was in the gallery. “I just kind of stumbled with the tee shot (at No. 16) at the end. I couldn’t afford one mistake, and I made one.”

Salas had three birdies and three bogeys through 16 holes, and stayed in it with a 20-foot birdie putt at No. 17. But she could manage only par at No. 18.

“I knew there would be some birdies out there and I knew I was capable of getting them,” she said. “I just hit some errant tee shots that caused some bogeys, but I didn’t give up. And, obviously, I can’t control what Lexi does, and she played an amazing day of golf.”