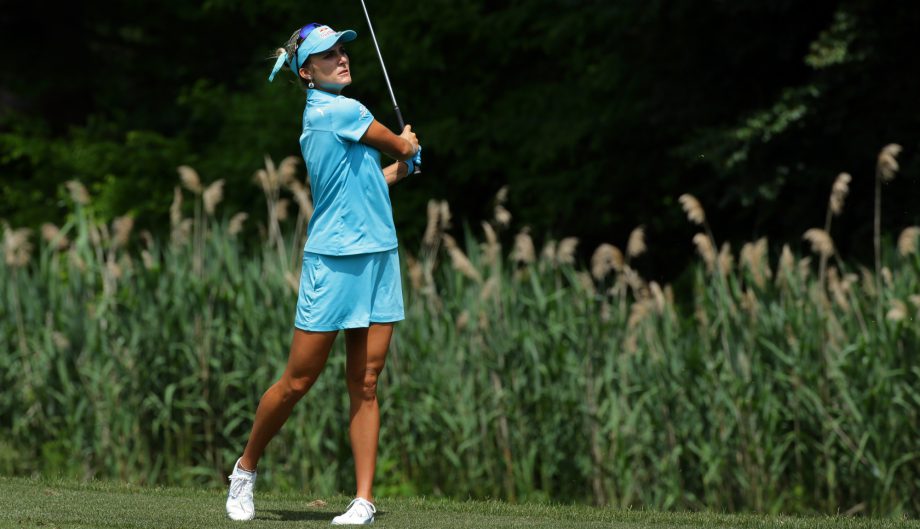 Lexi Thompson had six birdies in a seven-hole stretch and finished with a 6-under 65 on Thursday to take the first-round lead in the Kingsmill Championship.

Playing her third tournament since losing the ANA Inspiration in a playoff after being penalized four strokes for a rules violation that a TV viewer spotted, Thompson had a one-stroke lead over U.S. Solheim Cup teammates Gerina Piller and Brittany Lincicome and young American Angel Yin.

Thompson played her opening nine in even par with a birdie on No. 11 and a bogey on No. 17, then birdied No. 1 and Nos. 3-7 on Kingsmill Resort’s River Course.

“The second nine was pretty crazy,” Thompson said. “I hit some great shots and rolled a few good putts, so definitely helps out my confidence.”

“Words can’t even describe the feeling. It was just like a feeling of freedom jumping out” @Lexi talks skydive & current lead @KingsmillLPGA pic.twitter.com/5FEzuur0JA

“It always helps to see the other players in your group play well,” Thompson said about Piller. “She played great today, too. She struck it very well and rolled a lot of great putts. It’s something that we feed off each other with.”

On Wednesday, Thompson began a charitable partnership with the SEAL Legacy Foundation called the Lexi Legacy Challenge, completing her first parachute jump by landing on the first tee for her pro-am round. She made her sky diving debut in tandem with a Navy SEAL.

“It was an unbelievable experience,” Thompson said. “Supporting the SEAL Legacy Foundation is my No. 1, and just the military in general. But the only way I would jump out of a perfectly good plane is with a SEAL on my back. There was nothing like it. Words can’t describe the feeling. It was just like a feeling of freedom jumping out.”

Top-ranked Lydia Ko was two strokes back at 67 along with Sarah Jane Smith and Giulia Molinaro.

“I don’t think I was hitting the ball fantastic, so there is a little bit of improvement to do there,” Ko said. “The girls are playing great, so I know that I need to try and keep up, and to be in contention, I need to make a lot of birdies out there.”

Piller had six birdies and a bogey.

“It’s always good to get off to that kind of start and get comfortable,” Piller said. “The greens are rolling phenomenal. The course is in the best shape I’ve ever seen it. Just happy to be under par and looking forward to tomorrow.”

“I’d love to get my first win but golf is merely my job it’s not who I am.” Watch more from @Gerinapiller at @KingsmillLPGA: pic.twitter.com/km21oabrit

Lincicome had five birdies in a bogey-free round. She won the season-opening event in the Bahamas.

“I think it’s best I’ve ever seen it,” Lincicome said about the course. “The greens are so fast. If you get above the hole you got to be really careful.”