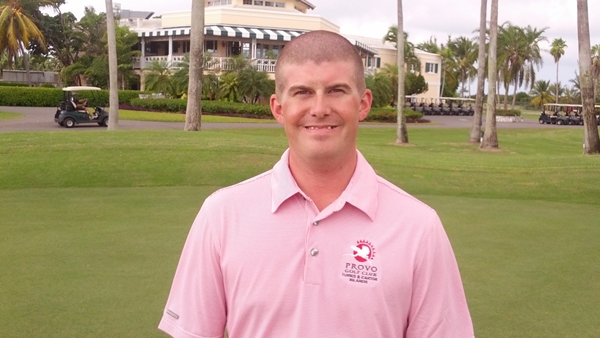 In this mad, mad world, life’s a nicely manicured Caribbean fairway for PGA of Ontario member Scott Loosley, more so than a beach or a highway.

The 25-year-old London, Ont. native hung out at some pretty cool places while growing up including; Greenhills Golf Club, St. Thomas Golf and Country Club, Glen Abbey Golf Club and Grandview Golf Club, where his father Simon Bevan worked as a golf professional. Harsh Ontario winters don’t appear to be in Loosley’s blood.

The sun is quickly setting on what would be a dream job for most assistant golf professionals in Ontario, as Loosely packs up his clubs and luggage and returns home next month from Provo Golf & Country Club and the beautiful sandy beaches of Grace Bay in stunning Turks and Caicos.

“I love being down here in the winter. It’s a great atmosphere with a terrific membership and we see lots of Canadians who needed a break from the snow and cold at home and come here for a little R&R and golf,” says Loosley, who wintered for the second year in a row in an apartment in Provo’s clubhouse and works under the tutelage of Director of Golf Dave Douglas from Sarnia, Ont. Douglas has called the resort course home for 15-plus years.

“I enjoy living at the golf course, you’re close to the action, but I really haven’t had time to play that much because I have been so busy with lessons and working in the shop. I haven’t even been to the beach or swimming in the ocean and it’s a 10-minute walk,” says Loosley, who also caddied for Brian Hadley at the 2013 RBC Canadian Open at Glen Abbey last summer while working as an assistant at Thames Valley Golf Course in London, Ont., where he will return this spring.

This past January was Provo’s busiest ever with 3,300 rounds in the books and the numbers stayed strong throughout the rest of the winter and into spring. I landed in Turks and Caicos because I was looking for some R&R, which in my books includes some golf, but I was equally excited about checking out Ocean Club Resorts where we stayed and the beach. I walked across the road from the road and down the driveway to the clubhouse in less than five minutes where I met Scott for the first of three rounds in three days under sun-drenched skies with the temperature hovering between 83 to 84F every day – just what the doctor ordered to escape the grey dullness of winter in Canada. Did I mention, it’s just a four-hour, direct flight out of Toronto Pearson to Providenciales (Provo) as belongers (locals) call the island?

Known for its natural, rugged layout through limestone outcroppings, Provo GC combines a solid test of golf stretching from 5,331 to 6,719 yards from the tips with captivating vistas of the natural flora and fauna of the islands – about 40 in total – some inhabited and some not. The course opened in 1992 after a three-year build by the Turks & Caicos Water company and today they pour nearly 300,000 gallons of desalinized water on the course nightly to keep it lush.

For that reason the inland golf course, which is relatively flat, is nearly always in awesome shape. The greens were as good as any of the top end greens you play at private clubs in the GTA and the new passpalum grass that’s being used as they rebuild tee boxes and make minor changes is outstanding.  The only knock against the course is that it would have been amazing to somehow have built a few holes along the coastline or at least given golfers a view of the water here and there, but I guess that is what the beach is for.

While I played in a two-to-three club wind each day – and I thought that was stiff – apparently those were pretty calm days!  While you can’t see the ocean, the course is not for the faint of heart. There’s room out there off the tee to keep your ball in play but there’s also six water holes on the front and four on the back nine. Inside of the clubhouse’s bar and grill the circular ceiling draped by hundreds of golf course pin flags from all around the world including a couple of dozen from Ontario and other Canadian clubs.

Ocean Club Resort where I stayed  is comprised of two all-suite properties, Ocean Club and Ocean Club West – and works for families, couples and guests looking for a three to four star retreat experience. Guests can indulge in spa treatments, sailing, snorkeling, diving, fishing, parasailing and of course golf with stay and play packages that are worth checking out. Of course, there is always the option of just relaxing under one of Ocean Club’s signature pink beach umbrellas with a good book while visiting Grace Bay Beach, the number one beach destination in the Caribbean as voted by TripAdvisor users.

As for food, there are lots of great places to check out including Ocean Club Resorts’ very own beach front Cabana Bar & Grill and Seaside Café, as well as the ultimate beach bar that’s well worth the taxi drive – Da Conch Shack – one of the best beach bars in the world. If you’re lucky enough to get there have a sip of the legendary rum punch and taste the outstanding Conch Salad. Loosley, on the other hand, is looking forward to some Canadian cooking! There’s no, Starbucks, no Tim Horton’s, no fast food chains to be found on his island paradise.  “The first thing I’ll do when I get off the plane is go to McDonald’s and fill up on burgers and fries – then I’ll know it’s back to reality,” says Loosley who can be reached at scott.loosley@hotmail.com if you’re considering lessons at or near the beach next winter.