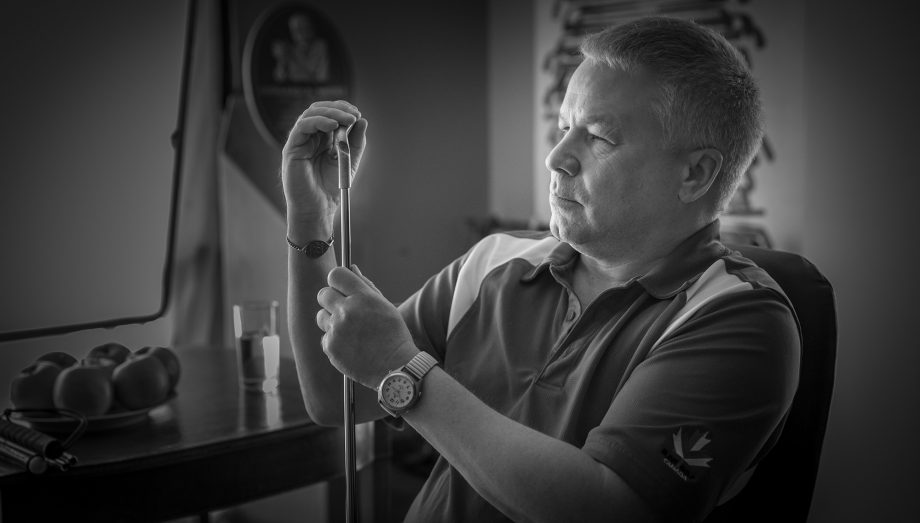 Gerry Nelson is blind.  “Completely black, no lights, no shadows.’” For a time, his ears didn’t appear to work either. In his early 20s, Nelson was working hard during the day and partying just as hard at night, for a stint “making bacon” on the assembly line of the Gainers meat plant in his hometown of North Battleford, Saskatchewan, and another time hauling sheets of drywall and sacks of concrete around a lumber yard.

Even his drinking buddies told him he should cut way back.  They knew that diabetes and gallons of alcohol were a dangerous cocktail, especially for Nelson who took his insulin every morning, but otherwise didn’t take the disease too seriously.  He learned about drinking from his alcoholic father, but not much about managing his diabetes since his mother died of leukemia when he was 11.

By the summer of 1988, at the age of 25, his eyes were so bad he could no longer play fastball.  He had surgery to re-attach both retinas in November, but within a few days he suffered a “major bleed” in both eyes and his world went dark.

“Mismanaging my diabetes caused me to lose my eyesight,” he says.  “People told me this would happen but I didn’t listen.” What did he do?  “I picked up where I left off : party, party, party.”

Unfortunately, Nelson’s story to this point is not unique to people who grew up in hardscrabble circumstances.  These stories are often told at wakes or funerals, or around the local bar.

But Nelson’s story—or shall we say, the rest of the story—is among one of the most inspiring in the Everyone Has a Story series on: golfcanadagolf.ca that launched in April.

In the video, Nelson, holding a 7-iron, his short hair silvery at age 51, says that when he lost his eyesight, “I had no idea what I was going to do.  I had no idea what I could do.  I thought life was over.  Golf was the catalyst that really got me going again.”

Nelson introduces himself in the video as the Western Canadian Blind Golf Champion.  He fails to mention that he’s won the title 10 times, and that he finished third in the World Blind Golf Championship in 2012.  His passion led him to help found Blind Golf Canada, which he serves as president with assistance from many others, including multiple-winner Brian MacLeod.

While he’s proud of his championships and the organization, they do not provide his greatest joy as a golfer.  “With my love for the game, and the fact that my son (11-year-old Wyatt) can participate in it with me now, there’s no greater joy I’d rather experience.”

The connection he cherishes with his son on a golf course and the feeling of a flushed shot are just some of the reasons Nelson took part in the storytelling series, which is geared toward inspiring more people to take up the game and stay with it.

Nelson is also proud to note he’s been working with the CNIB for 21 years, where he currently helps connect new clients to service providers and those who can help them.

He credits the CNIB for helping stop his spiral as “a guy with a white cane who partied all night and slept all day.” Two CNIB workers knocked on his door and invited him to a three-week educational program on independent living.  He dutifully went to listen, but left after a few hours.

Six months later, he gave the program another shot.  “I was ready,” he recalls. “Those three weeks changed my life and gave me direction.”

Determined to work for the CNIB, he moved to Saskatoon in 1990 and entered the University of Saskatchewan where he taught himself to type and use various accessibility programs.  It not only got him away from his drinking buddies, but also “gave me a purpose.  I was now a somebody.” He finished his degree in 1998 with Athabasca University through a distance program and started working with the CNIB.

After moving to Saskatoon, he was encouraged to take up golf again, which he’d played as a kid, mostly whacking balls around a park.  He had also played hockey and baseball, but considered himself merely “mediocre,” which is how he came to define himself.

A retired member of the Saskatoon Lions Club, who was also a golfer, had been looking for a blind golfer to assist.  Richard (Dick) Achen contacted Nelson and an amazing friendship and journey began. Achen started guiding Nelson on the driving range and around golf courses, and became like a father.

The guide’s role is simple: “Your job is to put the club behind the ball aimed at the target and get the hell out of the way.” On the greens, the guide reads the break, aims the club and tells the golfer if the putt is up or downhill and how far it is.  That’s about it.

During university, Nelson had about five months off every summer, and played just about every day at Greenbryre G&CC thanks to professional Peter Semko, later inducted into the Saskatoon Sports Hall of Fame.

“I was a natural,” Nelson says with the cheeriness and lively energy that came down the phone line in a recent interview. “With Dick’s help, I got better and better.  I got a taste of tournament play and I was a cocky rooster.  I built confidence in my game and it rubbed off on me as a person.  I started thinking there’s a lot more that I could do.

“As a kid, I had no confidence,” he continues.  “At university, I started to believe in myself.  I had a new identity and I could do all these things such as golf. Golf started it all.  I could take things that I learned playing golf and apply them to situations in life.  I learned to leave out things that are negative for me.  Along the way, I became a very positive person, thinker and a better father.”

People saw what Nelson had and they wanted to share in it, which led to his frequent role as a motivational speaker.  Although The Golf Channel hums constantly when Nelson is home, he doesn’t pay attention to the barrage of technical instruction.

“It’s all about feeling,” he concludes. “Like a sighted golfer, you get into a groove. You’re feeling it.  It’s not any one thing. I’m actually very good at visualization and imagination.  When I’m on a golf course and the sun is shining, I don’t need to see to know it’s a beautiful day and I’m the luckiest guy to be alive doing this.”