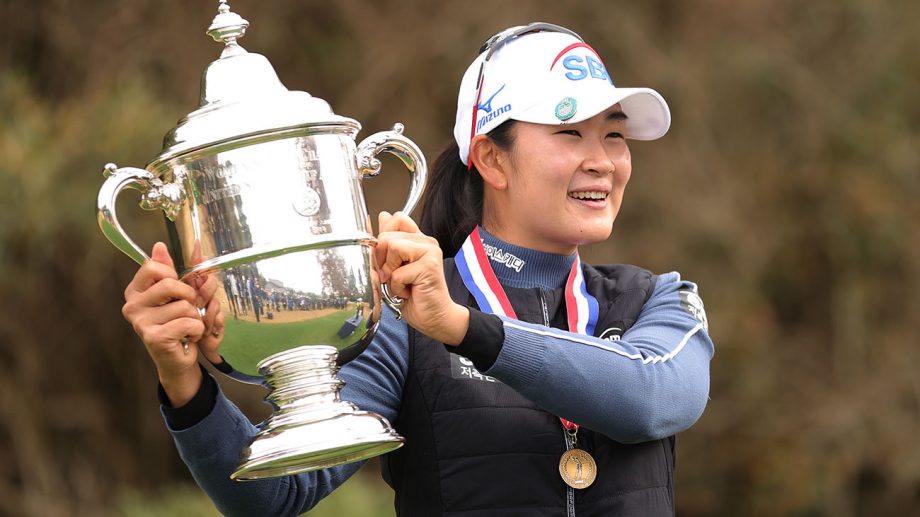 HOUSTON — A Lim Kim made her first U.S. Women’s Open appearance a memorable one Monday, closing with three straight birdies to tie the record for the largest comeback and win the biggest event in women’s golf.

And in the final major of this pandemic-disrupted year in sports, she won wearing a mask.

Starting the final, frigid round at Champions Golf Club five shots behind, the 25-year-old South Korean wore a heavy down jacket between shots and delivered a 4-under 67 for a one-shot victory over Amy Olson and Jin Young Ko.

“Still can’t really soak in that I’m the champion,” she said, minutes after being soaked in champagne on a day with temperatures in the 40s.

Kim became the seventh player to rally from five shots behind in the final round of the U.S. Women’s Open, and the first since Annika Sorenstam at The Broadmoor in 1995.

Olson held her own amid the grief of learning her father-in-law died unexpectedly in North Dakota on Saturday night. She was in tears Sunday morning on the range, before rain pushed the final round to Monday.

Olson, winless in seven years on the LPGA Tour, had a two-shot lead on the back nine after 54-hole leader Hinako Shibuno faltered. But she couldn’t do anything about Kim’s late charge, and Olson fell back when her hybrid on the par-3 16th bounded over the green and into thick, brown rough, leading to bogey.

She birdied the final hole for a 72 after Kim had already secured the title.

“I felt very weak and helpless the last couple days, and probably today on the golf course,” Olson said, fighting back tears. “I really believe the Lord just carried me through. It just makes you realize how much bigger life is than golf. But pleased with my finish overall and my performance.”

Ko, the No. 1 player in the world who only recently returned from South Korea where she rode out the COVID-19 pandemic, also birdied the 18th when it was too late to catch Kim. Ko closed with a 68, one of only six players to break par in the final round where the cold and mud-splattered golf balls added to the difficulty.

Kim finished at 3-under 281 and won $1 million. She added to South Korean dominance of this major, the ninth winner in the last 13 years.

Shibuno was trying to win in her first try at a second major, having won the Women’s British Open last year in her first tournament outside Japan. Her short game only carried her for so long, however, and she fell out of the lead by starting the back nine with consecutive bogeys.

Shibuno birdied the 18th hole for a 74 and finished two behind. Only four players finished under par.

Olson recovered from three straight bogeys early in the round and looked so solid for so long, taking advantage of her length and the high trajectory of her irons. She went 11 straight holes without a bogey, and still has no regrets over the hybrid that sealed her fate.

She had 170 yards to cover the bunker fronting the 16th green, and based on how far her 5-iron flew on the previous hole, she knew that would be enough. Her hybrid was beautiful in flight, but ran over the back of the green and left her little chance of par.

By then, Kim was on her way, attacking flags. Her 5-iron on the 16th settled 4 feet away. She hit 8-iron that rolled out to just under 2 feet on the 17th to tie for the lead, and she closed with a pitching wedge to just inside 10 feet, pumping her first when her third straight birdie dropped.

“I’ve been eyeing the leaderboard throughout the round and I knew how many shots I was back,” she said through a translator. “That’s probably the reason why I tried to hit more aggressive, tried to attack the pins.”

A two-time winner on the Korean LPGA, Kim got into the U.S. Women’s Open off the world ranking when the pandemic kept the USGA from conducting open qualifying. She had slipped to No. 94, the lowest-ranked player to win the Open since the women’s world ranking began in 2006.

She is the second non-LPGA member to win a major this year, joining Sophia Popov at the Women’s British Open. She also is the third South Korean to win a major. Second-ranked Sei Young Kim won the Women’s PGA and Mirim Lee won the ANA Inspiration — also at No. 94 in the world.

Texas senior Kaitlyn Papp birdied the 18th for a 74 to finish at 3-over 287, six shots behind in a tie for ninth, to be the low amateur.

Canadian Brooke Henderson teed off Monday morning for a round of 72, putting her at 10-over 294 for the tournament. The Smiths Falls, Ont., player placed in a tie for 44th. This year marks her eighth appearance at the event.