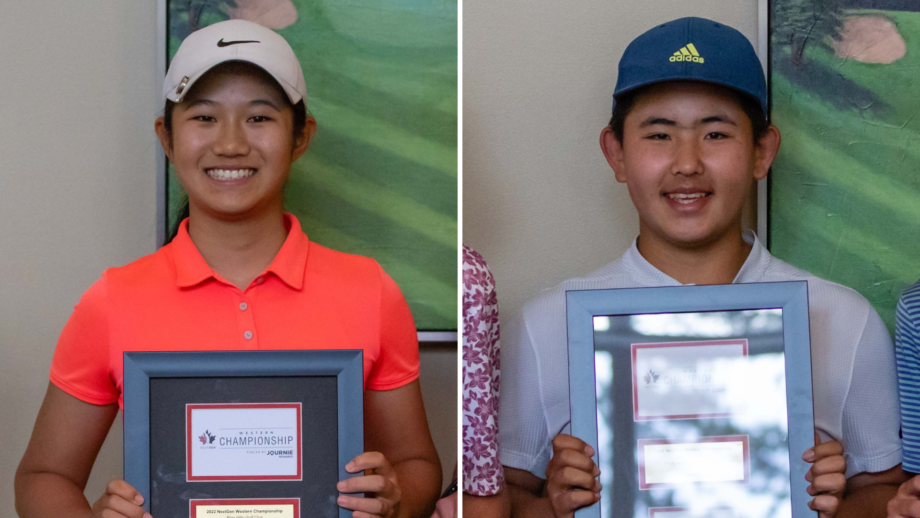 Lin, 12, and Zhang, 13, showed maturity beyond their years – and then some – at Pine Hills Golf Club in Rocky Mountain House, Alta. They certainly were not the oldest in the starting field of 93 players but this week they proved to be the best, winning their respective divisions at the junior event.

Lin, a Vancouver, B.C. native, lead wire-to-wire in the Junior Girls division, shooting even-par or better in each of the three rounds to secure a two-stroke victory over Eileen Park – yet another youngster who proved her talents out west.

“I had a lot of fun, [gained] a lot of experienced, learned a lot and played quite well,’ said Lin.

Lin, the second youngest player in the field in the Junior Girls divisions, welcomed the challenge of competing against girls up to the age of 19, and says she was just trying to play her own game, hit every shot well and learn from the experience.

The west-coast prodigy is now turning her focus to a U.S. Junior Girl Qualifier and says her main goal for this season is to qualify for that event.

Park, the runner-up in the Junior Girls division and youngest competitor in the field, put her talent on display in Alberta and showed why her potential is amongst the highest of junior girl golfers in Canada.

“I don’t have any fears. I’ve played with these girls for a few years now, so I am kind of used to it,” said Park. “It’s actually pretty fun to play with the older girls now. There’s a little more challenge [though] because they hit it further than me.”

The 12-year-old says she is trying to hit more “bombs” and throw more “darts” to make up for the gap in distance from the older girls. It’s safe to say she did her fair share of dart throwing this week, finishing 2-under par for the tournament.

Shifting gears, Park says she hopes to win the U19 Provincial Championship and “maybe” the Alberta Ladies Amateur Championship.

In the Junior Boys divisions, Zhang mounted an improbable comeback in the final round, firing a 1-under 72 for a two-stroke victory over Charlie Gillepsie. The 13-year-old showed that no moment was too big for him in a field where many of his competitors had more experience under their belt.

“I wasn’t scared at all, but I viewed it as a good challenge for me and a good test of golf,” said Zhang. “It was really great for experience to see how they managed emotions and their shots.”

“I knew my game was feeling pretty good going into today. I knew I had to play my own game, not think about the score and who’s leading, and I would have a good chance of winning,” said the Richmond, B.C. native.

Click here for full results of the 2022 NextGen Western Championship.

Including Lin, the top six players in the Junior Girls division have earned exemptions into the 2022 Canadian Junior Girls Championship taking place July 25-29 at The Marshes Golf Club in Ottawa, Ont.

From the Junior Boys division, the top six players have earned exemptions into the 2022 Canadian Junior Boys Championship, August 6-10, at Rivershore Estates & Golf Links in Kamloops, British Columbia. Tyler Kidd knocked off Cole Bergheim in a playoff to secure the final spot at Nationals.