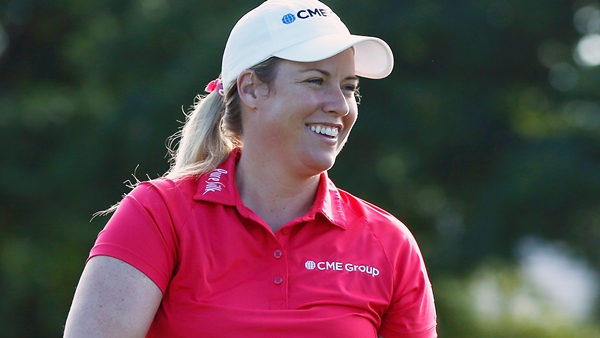 In wind gusting to 35-40 mph, Yoo completed a first-round 70 and shot 69 in the second to match Lincicome at 7 under on Atlantis Resort’s Ocean Club course.

Lincicome was 2 under in the second round with 13 holes left. She shot a 68 on Thursday.

“It was kind of just like hit-it-and-laugh kind of mentality,” Lincicome said. “Like we weren’t taking anything really seriously. We knew it was going to be blowing really strong and we’re just thankful we didn’t have to play all day. … There was nothing we could do about it. It’s so ridiculous out there that it’s not even normal. It’s kind of just you’ve got to laugh about it. You can’t get mad.”

After rain delayed play Thursday, only half of the players were able to finish the second round Friday. In May 2013, the inaugural event was reduced to three 12-hole rounds because of flooding.

Second-ranked Inbee Park, Dori Carter, Jenny Shin, Kelly Shon were 6 under. Shin and Shon shot 71, Carter had a 72, and Park was 1 under for the round with 13 holes left.

“My caddie, after we hit our approach shot on the last hole, said, `I’m not going to lie, this is the worst wind conditions I’ve ever seen,'” Carter said. “He told me on the last hole. He didn’t say it middle of the round. But we laughed about that.”

Lydia Ko, playing her first event since taking the No. 1 spot in the world ranking, was 3 under after rounds of 72 and 71. The 17-year-old New Zealander tied for second last week in the season-opening event in Florida, to break Tiger Woods’ record as the youngest player to reach No. 1.

Third-ranked Stacy Lewis was 2 under after rounds of 71 and 73.

Defending champion Jessica Korda was 1 over. She shot 73-74.

Brooke Henderson was in danger of missing the cut in her first LPGA Tour start as a professional. After opening with a 75, the 17-year-old Canadian was 1 over – and 3 over overall – through five holes in the second round. She won a Suncoast Series event last week in Florida in her pro debut and earned a spot in the field Monday in the qualifying tournament.

Michelle Wie also struggled. She opened with a 76 and played the first five holes in the second round in 2 over to drop to 5 over.

Rebecca Lee-Bentham was 4-over and Alena Sharp was 5-over thru four holes.