Lingmerth goes the distance and more to win Memorial 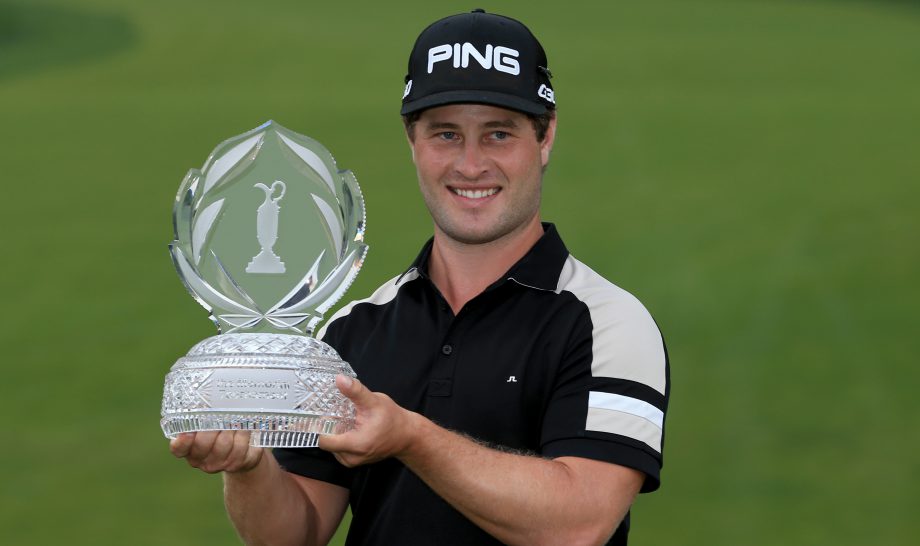 DUBLIN, Ohio – David Lingmerth didn’t crack over the final two hours Sunday at the Memorial, outlasting Justin Rose with a par on the third playoff hole at Muirfield Village to win for the first time on the PGA Tour.

Showing great resolve and little emotion, Lingmerth gave a soft fist pump when his putt just inside 5 feet on the 10th green dropped. He earned every bit of that handshake with tournament host Jack Nicklaus.

He’ll be going to the Masters next year for the first time – but not the U.S. Open in two weeks. Lingmerth moves to No. 71 in the world and still has to qualify Monday.

It was the longest playoff in 40 years of the Memorial, and it could have ended much earlier – or been avoided – if not for so many clutch moments.

Rose overcame a shank from a bunker on the 18th hole in regular and hit a 55-yard pitch out of deep rough to 3 feet to save par for an even-par 72 to force the playoff. On the 18th in the playoff, Rose holed a 20-foot par putt that went in from the right side of the cup. That looked as if it might be a winner until Lingmerth calmly sank a 10-foot putt to match his par.

On the 18th on the second extra hole, Lingmerth got up-and-down from a bunker.

It ended on the 10th hole when Rose when into deep rough, hit a fairway metal into the gallery, chipped 18 feet by the hole and missed his par putt. Lingmerth two-putted from 45 feet.

Lingmerth closed with a 69. So strong was his performance that he didn’t make worse than par over his final 11 holes.

Masters champion Jordan Spieth closed with a 65 and wound up two shots behind in a tie for third with Francesco Molinari of Italy, who was tied for the lead until hitting into the water on the 16th for a double bogey. He shot 71.

Tiger Woods showed improvement – it was hard not to after a career-worst 85 on Saturday. He shot 74 and finished last, 29 shots behind, with his worst 72-hole score (302) in his PGA Tour career.

Spieth was nine shots behind going into the final day and could not have imagined having to spend an extra three hours in Ohio. He chipped in twice – for birdie on the par-5 seventh and for eagle on the par-5 15th – and closed with a birdie. He posted at 13-under 275 and stuck around all afternoon to see if it would be enough.

Lingmerth made sure it wasn’t with a solid finish – a short birdie on the 15th to reach 15 under, and pars the rest of the way to reach 15-under 273.

Rose had the wild finish.

He was playing a tough bunker shot on the 14th when a fan yelled in his swing. Rose hit the shot to the fringe and made bogey, and then bounced back with an up-and-down from the bunker for a birdie on the 15th to make it a three-way tie.

That’s where his thrills began.

Rose hammered his first putt on the 16th some 10 feet past the hole and made bogey. He bounced back with a bending 12-foot birdie putt to rejoin Lingmerth in the lead, only to hit his tee shot on the 18th in a bunker. Needing par to force a playoff, he hit a shocker off to the right, into the gallery and off the head of a spectator.

The man was fine. The lie was not.

Buried in deep rough, Rose came out with perfect touch and watched it roll past the cup to 3 feet for a par and a playoff.

Spieth at least was headed to Chambers Bay – after a week at home in Dallas – feeling good about his game.

“Today I gained a lot of momentum going into the U.S. Open no matter what happens,” Spieth said.

In a strange way, so did Woods. It’s far better to have the last round before a U.S. Open be a 74 than an 85. Woods said he felt the swing he has been working on at the range was the one he used much of the final round. He still can’t avoid big numbers, though, such as pair of double bogeys over the last four holes that ruined an otherwise decent round. He still heads to Chambers Bay thinking about another major.

“I did not win, and I wasn’t even close,” Woods said. “So hopefully in two weeks’ time, things will be a lot better and I’ll be ready to try to win a U.S. Open.”

Patrick Rodgers earned special temporary membership with a tie for 40th, meaning he gets unlimited exemptions the rest of the way. But it wasn’t easy. He made bogey on the 15th and triple bogey on the 16th, only to finish birdie-birdie to lock it up.

Graham DeLaet tied for 26th and was the top Canadian. He finished at 5 under 283.