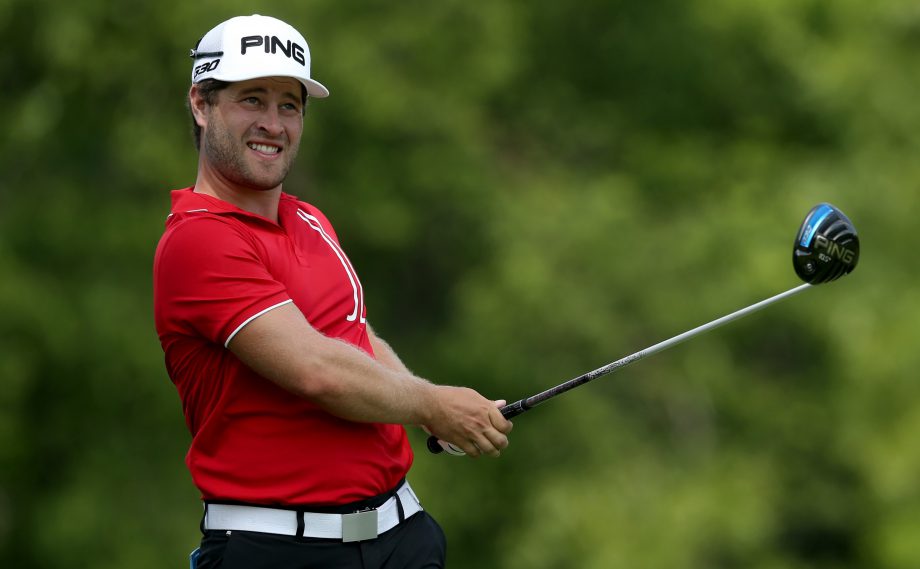 DUBLIN, Ohio – David Lingmerth took a step toward turning his game around with a 7-under 65 at the Memorial on Friday. It gave the Swede a one-shot lead going into a weekend that includes Tiger Woods.

Long after Lingmerth capped off a bogey-free round at Muirfield Village, Woods was 40 yards away from the flag on the 18th green and in dire need of getting up-and-down to save par and avoid missing his first cut at the tournament he has won five times.

For his second straight tournament, he holed a key putt to survive.

“At least I was able to make those putts, so that’s a positive sign,” Woods said after his 2-under 70. “Now I just need to put myself in the position where those putts are to win tournaments, not to make cuts.”

Woods had to hang on, making two straight bogeys before his par save on the final hole. For Jason Dufner, it was a thrill a minute.

Dufner made a 5 on a par 3 and a 3 on a par 5. And that was before he made a hole-in-one – his fourth eagle of the week – on the par-3 16th hole. He followed that with a bogey. It was relatively boring after that, and the former PGA champion wound up with a 67 that put him in final group with Lingmerth, just one shot behind.

Dufner didn’t have much to say – he rarely does, even when he won the PGA Championship two years ago – and spoke only to Ohio-based reporters. Until a tie for eighth last week at the AT&T Byron National, he had gone just over a year without a top 10 on American soil. The only time he made news was when his divorce was reported.

“I’m hitting it really good,” Dufner said. “I’m having enough good holes, good shots, to offset some of the mistakes I’ve had.”

Ryan Moore, gearing up for a U.S. Open near his hometown outside Tacoma, Washington, had another 67 and was at 10-under 134, along with Andy Sullivan of England, who can earn a spot at Chambers Bay with a good week at the Memorial.

A trio of past champions – Hideki Matsuyama, Jim Furyk and Justin Rose – were in the group that was three shots behind. Joining them was Patrick Rodgers, who made eight birdies in a round of 66 and is poised to at least secure temporary membership on the PGA Tour.

Good scores were stacked up behind them. There were plenty of birdies available on a course that still presents trouble around every corner.

“Every shot gets your attention,” Rose said.

It got the attention of Masters champion Jordan Spieth. He went out in 31 and was creeping up on the lead when he wound up on the wrong side of the 10th green and made double bogey, and he never recovered. Spieth missed a half-dozen putts from 10 feet or in and had to settle for a 70 that put him six shots behind.

Kenny Perry made bogey on his last hole for a 73 and missed the cut by one shot. The 54-year-old took a career money exemption for the year so he could end his career at the Memorial, which he won two times.

Lingmerth had missed four cuts in his last five starts, and the start of this tournament was ominous when he was 2 over through four holes. He made seven birdies on his last 12 holes on Thursday, and he made seven more Friday.

“I started giving myself some opportunities and the putts started dropping in,” Lingmerth said.

Dufner was tied for the lead late Thursday until he hit his tee shot into the water on the 18th and made double bogey.

He started Friday on the back nine and was in trouble early when he hit into the water on the par-3 12th and had to make a 4-footer to salvage double bogey. His fortunes changed quickly. He hit a wedge to 5 feet for birdie on the 14th. He hit hybrid into 6 feet for eagle on the 15th. And then he hit 6-iron into the hole on the par-3 16th.

Five under on three holes goes a long way.

Woods, meanwhile, opened with three birdies in four holes, though he was still wild off the tee. He mixed bogeys with birdies and was in reasonable shape at 3 under for the tournament until he missed the 16th green long and made bogey, and then found a deep patch of rough just off the left side of the fairway at the 17th, had to lay up and could get no closer than 30 feet from 100 yards. That bogey put him on the cut line, and he popped up his 3-wood off the 18th tee into rough.

This is the third straight tournament that Woods made the cut, something he hasn’t done in a year. He believes he is making progress, though the bar has been lowered significantly at the moment.

Canada’s David Hearn sits as the top Canadian. He’s tied for 16th at 6 under after two 69s.