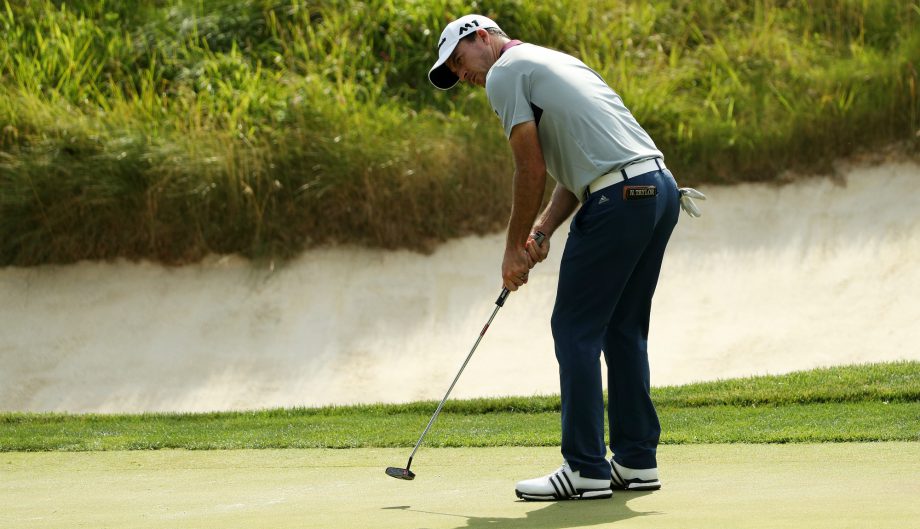 David Lingmerth knows he won’t have to shoot 20-under par for the week to win at tricky TPC Potomac. After two near-flawless rounds in the Quicken Loans National, he was halfway there.

The 29-year-old Swede, the winner of a Web.com Tour event on the punishing Washington-area layout in 2012, shot his second straight 5-under 65 on Friday to extend his lead to two shots over Geoff Ogilvy.

Lingmerth used his reliable fade off the tee to avoid trouble and set up birdie opportunities. He has gone 34 straight holes without a bogey. His final fade of the day was possibly his best, a 6-iron from 177 yards that he held up against the wind on the par-4 18th. It finished 7 feet from the hole, leading to birdie.

Several players said before the tournament that 10 under might be good enough to win. Lingmerth’s winning score five years ago was 8 under.

“It’s definitely as tough as advertised,” he said. “It happens quite a bit actually that (the) two-round score ends up being pretty close to the final winning score. That’s not necessarily always the case. So I’m hoping to keep plugging away, making more birdies over the weekend.”

Lingmerth hit 12 of 14 fairways on Thursday and 10 of 14 on Friday, and he hit all but five greens in regulation each day. His short game was sharp, too. After his approach came up short on the uphill par-3 12th, he hit a bump-and-run into a steep slope that trickled onto the green and settled inside 2 feet.

The former University of Arkansas player won the 2015 Memorial for his lone PGA Tour title.

Ogilvy played in the first group off the 10th tee and also shot 65.

Daniel Summerhays shot 68 and was alone in third, four shots back. Sung Kang, who shot 69 amid tougher conditions in the afternoon, was five shots back along with Arjun Atwal (67).

Ogilvy took advantage of calm morning conditions and flawless greens to birdie three of his first four holes. He added birdies from 6 feet on No. 1 and inside 2 feet on Nos. 2 and 4. He finished with an 8-footer for par.

“That 7:15 (tee time) is pretty early. You’ve got to get out of bed pretty early, but once you get out here it’s always nice. It was the perfect morning to play golf,” Ogilvy said. “It’s always nice to be under before you’re over on a course this hard.”

The 2006 U.S. Open champion, who was once ranked No. 3 in the world, now sits at 232 and had to take a one-time exemption for being in the top 50 in career earnings to maintain his PGA Tour playing privileges this season. He missed the U.S. Open for the first time in more than a decade and isn’t in the British Open, either, although that could change this week. The top four players in the Quicken Loans National field who aren’t already exempt will qualify for the British Open, provided that they finish inside the top 12.

“I have to get the job done here,” Ogilvy said. “Back in the day when I was top 50 in the world, you have long-term exemptions, I would have considered going to play France this week.”

No one came close to challenging the leaders in the afternoon as the wind picked up, firming up the already-dry fairways and baking out the greens at TPC Potomac, which is hosting the event for the first time. The cut was 4 over.

Big numbers were easy to come by. Playing in the featured afternoon group with Rickie Fowler, Marc Leishman bogeyed four of his first six holes before rallying on the back nine to shoot 72 and remain in contention, eight shots off the lead. Fowler didn’t make a single birdie in his round of 72. He was 12 shots back.

Justin Thomas, the second-highest-ranked player in the field behind Fowler, couldn’t overcome the quadruple-bogey 9 he made on the 10th hole Thursday. He missed his second straight cut and hasn’t broken par since his record-tying 63 in the third round of the U.S. Open.

Russell Henley, who shot 67 on Thursday, made nine bogeys and was 10 shots worse on Friday. He still made the cut on the number.

Atwal is playing on a sponsor’s exemption from the tournament host who happens to be a good friend _ Tiger Woods, who is skipping this year’s tournament while he seeks treatment for his use of prescription drugs.

“I’ve been talking to him almost every day, and obviously he’s one of my better best friends as I would say. He wants me to play well,” Atwal said. “I’m hoping I won’t let him down.”