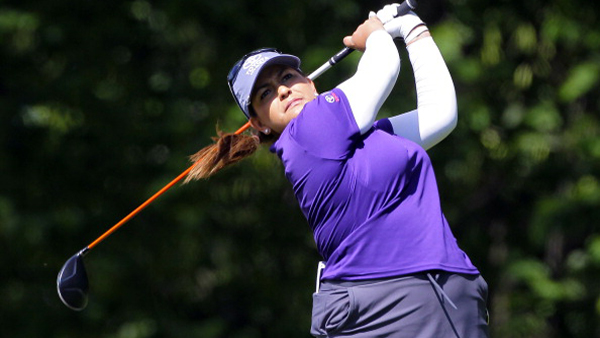 WILLIAMSBURG, Va. – Lizette Salas moved into position for her first LPGA Tour victory, playing 25 holes Saturday in 6-under par to take a three-stroke lead in the Kingsmill Championship.

The 24-year-old former Southern California player shot a 3-under 68 in the completion of the rain-delayed second round and birdied three of the last five holes in the afternoon for a season-best 65.

“I took a different approach this week,” Salas said. “I only played the pro-am. I’ve seen the course several times. It’s my third year here. I didn’t want to think too much about the golf course and just hit my targets. Last week, I had a good practice session at home, so I was feeling good coming in.”

She had a 13-under 200 total on Kingsmill Resort’s River Course.

South Korea’s Hee Young Park, the second-round leader, was second. She bogeyed No. 18 for a 69.

“Today, a little bit miss driver off the fairway, so it’s bit tough to make it close or make birdie chance,” Park said. “Tomorrow, a little more focus on the accuracy rather than distance.”

Second-ranked Stacy Lewis and No. 3 Lydia Ko, both trying to take the top spot in the world from Inbee Park, were five strokes back along with Katherine Kirk. Lewis shot 70, Ko 67, and Kirk 68.

Coming off a victory two weeks ago in the North Texas LPGA Shootout, Lewis would jump to No. 1 with a victory or a solo second-place finish, as long as Ko doesn’t win. Ko needs a victory to move to No. 1. Inbee Park is skipping the tournament.

“I started on 13 this morning,” Ko said. “Luckily, I birdied that and birdied the next hole. After that, I just kind of went back to my hotel and had some rest.”

Kraft Nabisco winner Lexi Thompson was 7 under along with Yani Tseng and Pornanong Phatlum. Thompson shot 70, Tseng 68 and Phatlum 66.

“I have good confidence with my putter and short game today,” Phatlum said. “Just try to be relax tomorrow and try my best.”

Salas began the day with a bogey on the par-5 third – her 12th hole in the second round – and closed with a birdie on the par-4 ninth.

“I was pretty upset about that one,” Salas said about her lone bogey of the day. “I don’t like bogeying par 5s, and especially a three-putt. So, that gave me a little bit extra motivation.”

She had a long wait before starting the third round.

“I had about 2 1/2, 3 hours to kill,” Salas said. “I went in to the physio trainer got some work done on my lower back, took like a 10-minute nap, and just started my whole routine again. … Didn’t hit a lot of balls on the range today. Just did a couple drills. I just knew it was going to be a long day, so I didn’t want to overdo it on the range.”

“On 14, that was a putt that I knew was going to go in,” Salas said. “I read it correctly. … That was probably the purest stroke of the day.”

Salas made an 8-foot birdie putt on the par-3 17th and saved par on the par-4 18th with a 4-footer after running her long birdie try past the hole.

She has missed some good chances to win in the last two years.

Last year, playing alongside winner Inbee Park in the final group of the Kraft Nabisco, the American finished with a 79 to tie for 25th.

Two weeks later, Salas lost a playoff to Suzann Pettersen in the LPGA LOTTE in Hawaii. Salas chunked her approach into the water on the first extra hole after closing with a tournament-record 62.

This year, Salas tied for third in the season-opening event in the Bahamas and finished second in the Kia Classic in California.