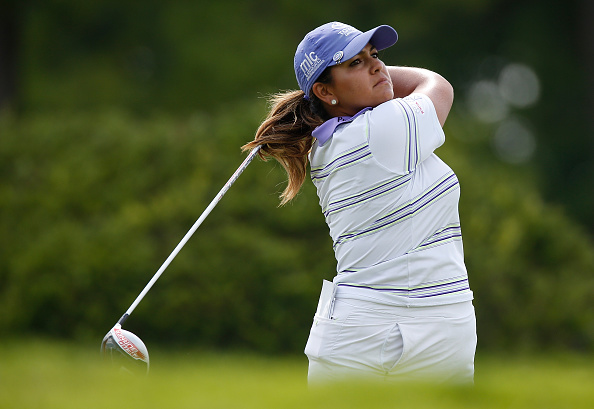 BELMONT, Mich. – Lizette Salas thinks things are finally going her way and the results on the golf course are starting to match the work she has put in her game.

Without a top-10 finish this year, Salas shot a 7-under 64 on Saturday to take a four-stroke lead in the Meijer LPGA Classic, putting her in position for her second tour title.

“A lot has happened since I turned pro four years ago, and I have struggled this year but also kept working,” Salas said. “Finally, I’m playing the golf I’ve been working so hard to find. I’m really happy. Now I just want to focus on each shot and focus on keeping calm.”

The 26-year-old former University of Southern California player won the 2014 Kingsmill Championship and played on the 2013 U.S. Solheim Cup team.

She stayed calm in the third round, birdieing Nos. 14-16 and closing her bogey-free round with two pars. She had a 16-under 197 total at Blythefield Country Club.

“I think the putter really, really came in today,” she said. “I just kept it in the fairway and kept knocking them close. I don’t know what’s going on. Everything’s been going my way and I’ve been staying positive and just really focusing on my shots. I’m, really, really happy.”

Birdies on three of the first four holes and another at the par-4 ninth hole allowed Salas to pull in front of the field. After saving par with a 25-foot putt at 13, she hit a shot inside 2 feet at the par-3 14th for birdie and followed with a 6-footer at 15 and a 30-footer at 16.

Lexi Thompson and Michigan native Kris Tamulis were tied for second. Tamulis, whose family still summers in Northern Michigan, shot 67. Thompson had a 68.

Tamulis, a former Michigan Women’s Open winner and Symetra Tour graduate, said winning for the first time on the LPGA Tour in her home state would be a dream come true.

“I played all my junior golf here and my parents still live here in the summer, so it would be very special,” Tamulis said. “I can’t get ahead of myself though. I’ve had low expectations all week. I’ve played long enough to know there is a long way to go and great competition.”

Thompson, tied for the second-round lead with Salas and Alison Lee, missed a 4-foot putt and made bogey at 16, but birdied the par-4 18th with a 3-footer.

Thompson was disappointed with her putter most of the day.

“She was on a roll today,” Lee said. “It just shows it’s possible to shoot that low of a round, so I’ll take what I can from that and play well tomorrow.”

Top-ranked Inbee Park, a three-time winner this year, had five birdies in a six-hole stretch and finished with a 66 to move into a tie for 10th at 5 under. She said it was great to be near the lead in preparation for next week’s Women’s British Open.

“It’s a lot more fun, sure, but you want to be competing in contention and obviously want to try a few things under the pressure,” she said.