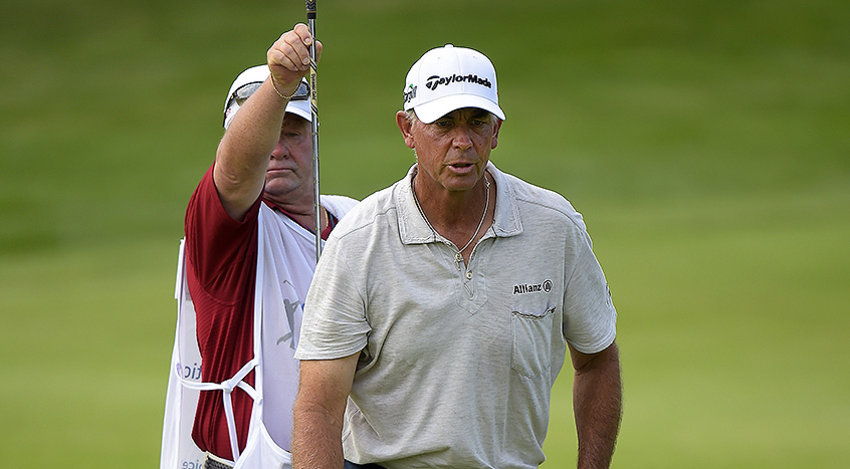 Tom Lehman is on top by three after one round of the 3M Championship. (Stan Badz/PGA TOUR)

BLAINE, Minn. – The past couple of years have not been happy homecomings for Tom Lehman.

Things are off to a much better start this time.

The local favorite shot an 8-under 64 on Friday to take a three-stroke lead in the Champions Tour’s 3M Championship.

Lehman had two birdies and an eagle in an early three-hole stretch, added a birdie on the par-4 ninth and closed with three more birdies at the TPC Twin Cities, the course he helped Arnold Palmer design.

“It’s nice to play a round of golf with no bogeys,” he said. “The last month, every round it seemed to get off to a good start or feel pretty good and then I suffer from too many mistakes.”

Lehman finished 29th two years ago while fighting the flu and dropped to 47th last year while battling pneumonia. He said he would’ve withdrawn had the tournament not been this one.

“It’s no fun to come here and play poorly,” he said.

The 56-year-old Lehman is from Alexandria and played at the University of Minnesota. He won the last of his eight Champions Tour titles last year in the Encompass Championship.

Marco Dawson, the Senior British Open winner last week, was another stroke back at 68 along with Bernhard Langer, Scott Hoch, Kirk Triplett and Jeff Sluman.

This is the ninth straight year the 3M Championship’s first-round leader has shot at least 7 under. The tournament winning score has been at least 15 under in each of the past eight years, including three winning totals of better than 20 under.

“We know it’s a birdie-fest out there,” Lehman said.

Starting on the back nine, Dunlap began bogey-birdie and remained at even par until a birdie on the par-3 17th hole. After a birdie at No. 18, Dunlap birdied five straight holes on the front side. He bogeyed two of the final four holes.

“It was a nice stretch where I was beating the wind for a while,” Dunlap said.

The wind got stronger as the nearly cloud-free day went along, occasionally gusting upwards of 25 mph.

Waite said there were times when he played two, and sometimes, three clubs more or less than he normally would depending if he was hitting into or with the wind. Lehman said there were a lot of times where it was best not to be aggressive and to simply aim at a safe spot.

Waite, who has one top-10 in 11 previous tour starts this year, birdied four of five holes on the front side, and played the final nine holes in 1 under. He missed a 25-foot birdie putt on the final hole by about an inch.

Horgan, a Tuesday qualifier, was 2 under through nine, and twice had back-back birdies during his final nine before a bogey at No. 17. He has finished 50th or worse in three of his four tour starts this year, including missing the cut last week in the Senior British Open.