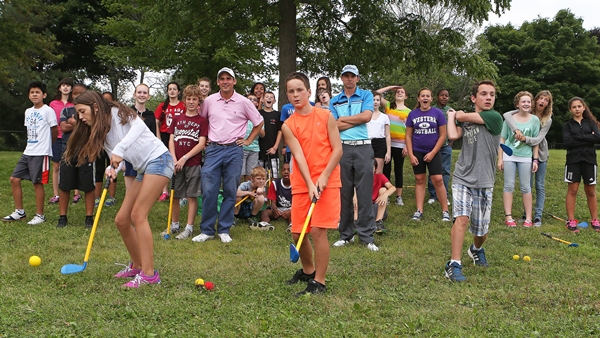 LONDON, Ont. – While the stars of PGA TOUR Canada will vie for the championship title and the Top-5 exemption to the Web.com Tour, the real winners of the TOUR Championship of Canada presented by Freedom 55 Financial will be the hundreds of children introduced to the game of golf through the event’s community legacy campaign.

In all, 18 schools within the London area will receive the Golf in Schools program in the honour of this week’s season-ending event on the PGA TOUR Canada season at Sunningdale Golf and Country Club in London, Ont.

In establishing a community legacy for the TOUR Championship, Golf Canada invited area golf clubs throughout London and Southwestern Ontario to participate in a campaign to adopt schools to be a part of the Golf in Schools program. In all, seven golf clubs and groups adopted schools and Golf Canada topped up the donations to bring the program to a total of 18 schools in Southwestern Ontario.

“We’re thrilled with the response we received from area golf clubs and community supporters to get behind the Golf in Schools program,” said Golf Canada’s Chief Championship Officer Bill Paul. “Knowing that hundreds of students in the London area will be introduced to the game of golf in the name of TOUR Championship is a fitting way to celebrate the signature event on PGA TOUR Canada.”

Earlier this week, PGA TOUR Canada players Nate McCoy and John Catlin visited a local area school to present the Golf in Schools equipment package and learning resource to the Grade 7/8 class at St. Marguerite d’Youville. The duo assisted PGA of Canada professional Brian Gallant from Fire Rock Golf Club in delivering a 75 minute Golf in Schools lesson outside in the school yard.

“Freedom 55 Financial is a big supporter of young athletes and helping individuals achieve their goals and dreams,” said Mike Cunneen, Senior Vice-President, Freedom 55 Financial.  “Bringing golf into our schools will not only help expose more children to the sport, but also promotes health and physical well being.”

The following London area golf clubs and community organizations took part in the Golf in Schools adoption program in the name of the TOUR Championship of Canada, presented by Freedom 55 Financial:

Golf in Schools – which is currently offered in more than 2,225 elementary and close to 230 high schools across Canada – provides children with a basic introduction to golf through the Canadian school physical education curriculum. The program, which is endorsed by Physical Health and Education Canada (PHE Canada), is conducted by Golf Canada in partnership with the PGA of Canada and the provincial golf associations.

More information about the Golf in Schools program including the school adoption program is available by clicking here.