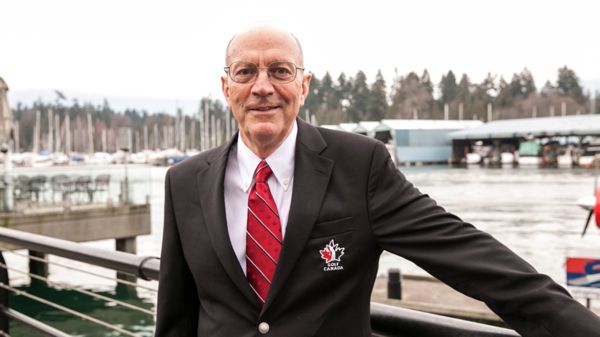 He may be Queen’s Counsel, but that doesn’t mean Mike Carroll can recognize a Prince.

Carroll, a Vancouver lawyer, has a long list of highlights from his recently completed one-year term as Golf Canada president. But he calls meeting Prince Andrew in rather unusual circumstances at last year’s Open Championship at Muirfield Golf Club in Scotland his “most amusing highlight.”

Carroll was representing Golf Canada at the Open Championship and he and his wife Anne were invited to one of the daily lunches the Royal & Ancient Golf Club puts on during the tournament.

The Carrolls were escorted to a table where there were already a few people seated, including a gentleman on Mike Carroll’s right. When Carroll introduced himself as Golf Canada president and a Vancouver resident, that person began to pepper him with questions about James Island, a privately owned island off Victoria where an exclusive Jack Nicklaus-designed course has been built.

“I was embarrassed because I had forgotten that the McCaw family owns the Nicklaus-built golf course on James Island,” Carroll says. “I told this guy that I wasn’t familiar with the course and in his British accent he said, ‘oh, you mean to tell me that you are the president of Golf Canada and you have no idea whether there is a golf course on James Island?. That is quite incredible.’”

Carroll let that rather rude remark slide and fortunately the conversation turned. At one point, Carroll’s seat-mate told him he had to “go back to Balmoral because my mother is having a function.”

Suddenly, it all clicked for Carroll, who chuckles as he recalls the conversation.

“I realized that Balmoral is Balmoral Castle in Scotland, which is the home of the Royal Family. Then it dawned on me. This was Prince Andrew, who by the way was a former captain of the R&A. We had a very nice chat for the next half-hour, Prince Andrew and I.”

The past year has been an exhilarating one for Golf Canada’s 110th president. Slow play may be one of the big issues facing the golf industry, but there has been nothing slow about the past 12 months for Carroll.

As Golf Canada president, Carroll attended the four majors and watched Brandt Snedeker and Lydia Ko win the Canadian Men’s and Women’s Opens. He also attended a number of amateur championships throughout the country.

“That was a personal highlight for me because I have been friendly with Jim and have known him for a long time.”

The presidency was a lot more than glad-handing at tournaments for Carroll, who practises law at the Vancouver firm of Davis & Co. and was appointed Queen’s Counsel in 1996. There was plenty of work to do and Carroll likes to think he helped move the needle in a couple of areas.

Under his guidance, the Golf Canada board continued its transition from an operational body to a policy board. Its job now is to set policy and then let Golf Canada staff follow up on its recommendations.

“In our board meetings this year we have continued to make really good progress, so that we are looking at what I would call the bigger picture items in golf, not the small stuff,” Carroll says. “An example of that would be what can we really do to get more kids playing golf?”

When he assumed the presidency at Golf Canada’s Annual General Meeting last February in Vancouver, Carroll talked about the need to get more children playing the game. He made that goal a priority over the past year.

He stressed the need for Golf Canada, in cooperation with the PGA of Canada and the National Golf Course Owners Association of Canada, to tackle this issue. Carroll strongly believes developing Canadian golf icons — “the next generation of Mike Weirs,” he calls them — is one of the ways to attract more young people to the game.

“The emergence of Graham DeLaet on the PGA TOUR is big and he is a very good ambassador for us and in particular for our young kids. He is really communicating with our national amateur teams. He tweets them and is sort of one of the guys. He takes a very active interest in how our young players are doing which is invaluable for us.”

At the amateur level, Carroll was encouraged by the fact four Canadians advanced to the Round of 32 at last summer’s U.S. Amateur Championship, with Corey Conners of Listowel, Ont., making it all the way to the semi-finals.

On the women’s side, Carroll notes the splendid play of 16-year-old Brooke Henderson of Smith Falls, Ont. Henderson, who has recently won several high-profile amateur events, is now ranked sixth in the world.

As for his own game, Carroll says it has suffered. The combination of his busy schedule and a fairly recent interest — some would say obsession — with cycling, has resulted in Carroll’s Handicap Factor rising to double digits.

He says his friends at Point Grey Golf Club, the Vancouver course where he is a long-time member, will be seeing much more of him this year.

“My golf has suffered as a result of my cycling,” Carroll says. “But I am absolutely determined that I am going to get back to playing more golf now that my stint with Golf Canada is coming to a close. And I have a goal which is basically to get back to a high single-digit handicap. It is a goal that is going to be difficult to accomplish given the current state of my game.”