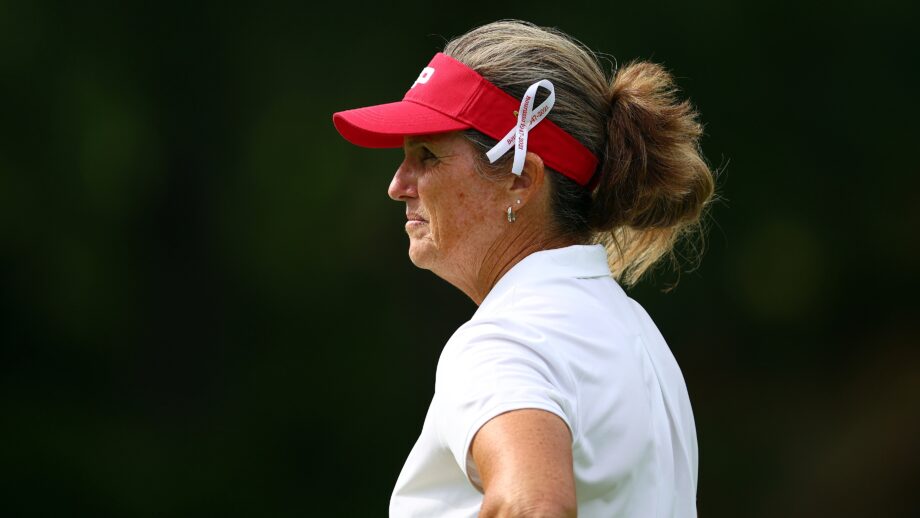 OTTAWA – Lorie Kane patted her heart to thank the hundreds of fans cheering for her as she walked up the 18th fairway at Ottawa Hunt and Golf Club.

Behind Kane, her niece Charlotte Jenkins _ who served as her caddie _ waved the crowd on to get the chants even louder. When Kane reached the edge of the green she took a bow to rapturous applause.

The loving tribute was a fitting farewell for one of the most successful and influential golfers in Canadian history.

Kane, who turns 58 this December, had already announced that this year’s CP Women’s Open would be her last. As it was clear she would miss Friday’s cut, fans, officials and volunteers came out to watch her last round ever at the national women’s golf championship.

“It’s very humbling,” said Kane about the ovation. “I love to entertain, but when it’s directed totally at you, it’s really ? it’s uncomfortable.”

That instinct to entertain lasted right through her final two holes.

On the hockey-themed No. 17, Kane pulled on a Toronto Maple Leafs jersey, wearing a mischievous grin as chants of “Lorie! Lorie!” turned into boos and calls of “Go Sens!” and “Anybody but the Leafs!” She stopped to fist bump only one fan at that hole, pointing at his Maple Leafs windbreaker before tossing him a keepsake.

“I just played golf to put smiles on people’s faces,” said Kane. “I know the Leafs jersey didn’t go over quite as well as I would have hoped, but it was fun.”

After the rousing ovation on her approach on the 18th hole Kane missed her first putt. As the crowd groaned she made an exaggerated shrug to laughs before tapping in her final shot, finishing 28 over.

Kane thanked Hamilton’s Alena Sharp and Australia’s Sarah Jane Smith, her playing partners on Friday and Saturday, as she grinded out her final two rounds at the CP Women’s Open.

Sharp shot a 1-over 72 to finish the day tied for 57th at 3-under par when play was called due to darkness. She said it was an honour to play alongside Kane, who had been such a positive influence on her career.

“I grew up watching her and then playing with her out here on the LPGA Tour, it’s great. She’s a legend,” said Sharp. “It’s cool to be part of (Kane’s final rounds).

“With all of her successes I think it gave everybody inspiration to play well. You can win on the LPGA Tour.”

Kane, from Charlottetown, won on the LPGA Tour four times. She won the Bobbie Rosenfeld Award as The Canadian Press’s female athlete of the year in 2000. She was named to the Order of Canada in 2006 and has been inducted into the Canadian Golf Hall of Fame and Canada’s Sports Hall of Fame.

Maddie Szeryk (68) of London, Ont., was the low Canadian after two rounds. She had her second consecutive bogey-free day to sit in a tie for 13th at 7 under.

“I just played really solid. I hit a bunch of greens and putted it OK,” said Szeryk, who had back-to-back bogey-free rounds for the first time in her career.

Brooke Henderson, from nearby Smiths Falls, Ont., shot a 3-under 68 to sit at 5 under in a tie for 32nd. Amateur Lauren Zaretsky (71) of Thornhill, Ont., also made the cut, tied with Sharp at 3 under.

Toronto’s Rebecca Lee-Bentham was through 15 holes and sat at 4 under when the horn sounded. She will resume her second round early Saturday morning, looking to stay below the 2 under cutline.

Several Canadians missed the cut on Friday. Selena Costabile, also from Thornhill, Maude-Aimee Leblanc of Sherbrooke, Que., Valerie Tanguay of St-Hyacinthe, Que., Brigitte Thibault of Rosemere, Que., and Megan Osland of Kelowna, B.C., will not play in the third or fourth rounds.

From all of us who have been lucky enough to have witnessed your career, thank you.

You are the superlative ambassador for @CanadianPacific, @GolfCanada, the @LPGA & all of 🇨🇦.

WE are the lucky ones. pic.twitter.com/RLqRHoVlHb