Kane, Sye and Weeks named for induction into Canadian Golf Hall Of Fame 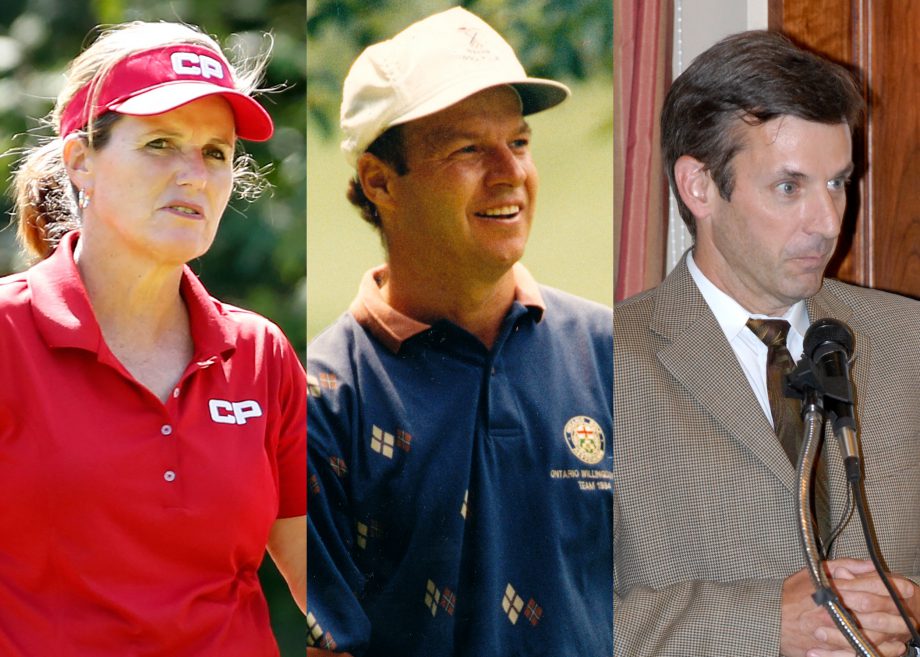 Listen to the announcement by clicking below.

Kane and Sye are being inducted under the player category, while Weeks will be inducted as a builder. With their inductions, the trio will become the 75th, 76th and 77th honoured members of the Canadian Golf Hall of Fame.

“For over 40 years, the Canadian Golf Hall of Fame has recognized the accomplishments of outstanding individuals and their tremendous impact on the game of golf in Canada,” said Sandra Post, Chair of the Hall of Fame’s Selection Committee. “Each member of our 2016 class of inductees has demonstrated passion, dedication and excellence in shaping the place of golf within the Canadian sporting landscape. It is with great pride that we welcome them to stand alongside the Canadian Golf Hall of Fame’s honoured members.”

Lorie Kane started playing the game of golf at the age of five. As her interest and talent grew, she came under the tutelage of Canadian Golf Hall of Fame honoured member Jack McLaughlin, whom she still credits as an inspiration and major influence in her career.

Provincially, she won the P.E.I. Junior Girls Championship twice and was the P.E.I. Women’s Amateur Champion nine times between 1983 and 1992. Her extraordinary amateur career saw her represent Canada on several occasions, including as a member of the Canadian Commonwealth Team and the Canadian World Amateur Team, as well as taking part in the World Cup. In 2015, Kane represented Canada in the first-ever golf competition at the Pan Am Games.

Kane turned professional in 1993 and three years later earned exempt status on the LPGA Tour. Over the next several years, she accumulated 34 Top-10 finishes, nine of which were runner-up results. In 2000, Kane captured her first professional win at the Michelob Light Classic in St. Louis and also won three more times on the LPGA Tour that same year. Nationally, she captured the Canadian PGA Women’s Championship from 1996-1999 and again in 2001.

Throughout her career, Kane established herself as one of the most popular LPGA Tour players with players and spectators. Her accomplishments garnered her the Heather Farr Player Award in 1998 and the Mousie Powell Award in 2000. In 2006, Kane was presented with the Order of Canada.

She is known for her generosity and dedication to charitable organizations, having been the Kidsport P.E.I. official spokesperson since its inception in 1997 and currently serves as the ambassador for the CP Has Heart charity campaign.

With her induction, Kane becomes the first native of P.E.I. to be inducted into the Canadian Golf Hall of Fame.

Sye excelled provincially, capturing the Ontario Amateur Championship five times between 1988 and 1996. He also claimed the Ontario Champion of Champions title in 1983 and again in 1991.

His success nationally includes a pair of victories at the Canadian Men’s Amateur Championship (1990 and 1994). During that time, he was also a member of four Willingdon Cup teams representing Ontario. He captured the Ontario Senior Championship title in 2012.

His extraordinary accomplishments as an amateur golfer were recognized by SCOREGolf Magazine, winning their “Male Athlete of the Year” award in 1985, 1990, 1994 and 1996. In 2003, Warren Sye was inducted into the Etobicoke Sports Hall of Fame and the Ontario Golf Hall of Fame.

Bob Weeks is a golf analyst and senior reporter for TSN, where he provides coverage of the sport from across the globe. During his time as a journalist, he has covered more than 60 major golf championships, as well as hundreds of top Canadian and international championships.

Weeks began his career in golf media with SCOREGolf in 1987 and rose to the position of editorial director in 2012, overseeing all content at the media company. He hosted SCOREGolf TV for 16 years and spent 20 years as the voice of the SCOREGolf Show – a daily 90-second golf radio program heard in more than 70 markets across the country.

In 2009, he was recognized on the National Post’s list of the most influential people in Canadian golf and ranked sixth overall. An award-winning writer, Weeks has written for GOLF Magazine, Golf Digest, Golfweek, the Globe and Mail, Maclean’s, as well as countless other publications throughout the world.

Weeks, who began playing golf at the age of 11 in P.E.I., has been a proud member of Weston Golf and Country Club in Toronto for more than 40 years.

He is a member of the Ontario Golf Hall of Fame and a winner of the Golf Journalists Association of Canada’s Dick Grimm Award. In 2015, Weeks was presented with a Distinguished Service Award by Golf Canada for outstanding contributions to the game. In addition to golf, Weeks is a respected curling journalist who in 2016 will also be inducted to the Canadian Curling Hall of Fame.