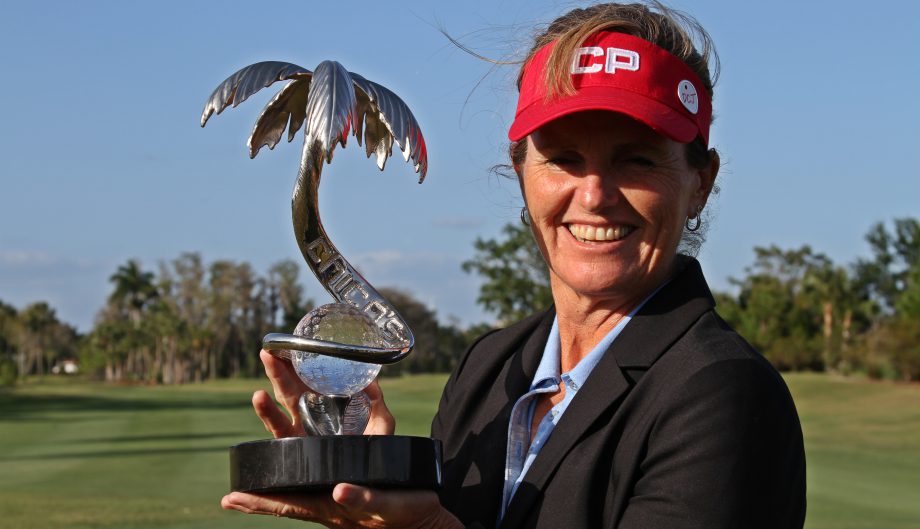 FT. MYERS. Fla. – Sweden’s grinded on a very windy Sunday at the Chico’s Patty Berg Memorial to capture her first professional victory.  The 23-year-old posted a 3-over 75 to win by one shot at 9-under 279. Sophia Popov (Heidelberg, Germany) finished second and Sherman Santiwiwatthanaphong (Thailand) took third at 5-under 283.

Four-time LPGA Tour winner Lorie Kane won the Legends Tour event by three shots at 1-under 143. The 51-year-old Canadian had a 1-under 143 total and earned $19,500. Barb Mucha was second after a 73, and Jane Crafter was another stroke back after a 74.

The first place Symetra Tour check of $30,000 moves Sagstrom to first on the Volvik Race for the Card money list at $52,914 through just three events. Sagstrom becomes the fastest player in the history of the Symetra Tour to cross the $50,000 mark in single-season earnings. In 2015, Giulia Molinaro was the first player to reach $50,000 and she didn’t cross that mark until the Fuccillo Kia Championship, which was the 15th event of the year.

“It feels great, I feel so good at the moment and I had such a great time on the golf course today,” said Sagstrom, who was the 2015 SEC Player of the Year at LSU. “It was definitely tough, but we played pretty well and I had such a good time.”

On a day filled with heavy winds, Canada’s Rebecca Lee-Bentham carded a 4-under 68 on Sunday to finish T8. Bentham’s 68 was the only round in the 60’s.

“I went out there and played like I had nothing to lose,” said Bentham, who was plagued by injuries in 2015 and lost her LPGA Tour status. “I made a birdie on the first hole and from then on I hit everything close and gave myself chances. I never really had to grind for par.”

Bentham, a former Team Canada Young Pro member, finished T4 in last week’s Florida’s Natural Charity Classic, where she carded a 3-under 69 on the final day. She started her first round off with a 4-over 74 and then posted back-to-back 69’s.

This week, she carded a 6-over 76 in the first round and once again played her best on the weekend.

“It’s kind of my trend,” said Bentham. “I always start on a bad round and then work my way up on the leaderboard.”

Coming off last year, where Bentham held conditional status and battled injuries, the Toronto native is focused on making the top ten on the Volvik Race for the Card money list.

Her strong finish this week moved her to eighth on the money list.

Augusta James of Bath, Ont., finished 4th and was the top Canadian.