Love hits the road and gets some tips 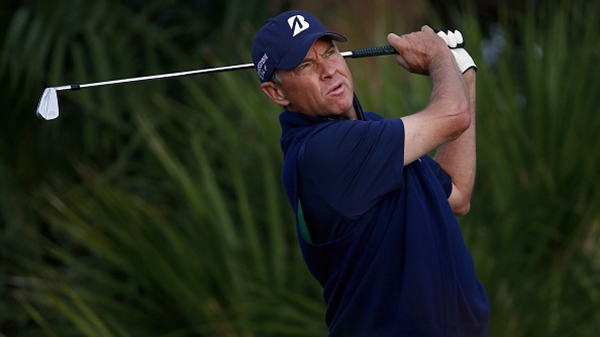 KUALA LUMPUR – At age 50, Davis Love III doesn’t need much advice on how to approach golf tournaments. The tropical heat of Malaysia this week, and the expansion of the PGA Tour, will at least give him some new experiences and challenges.

Still on the comeback from neck surgery in 2013 that sapped the strength in his left arm, Love is ready to take on an international schedule and eager to get his game back to its best.

Two players familiar with the rigors of regularly crisscrossing the globe are Sergio Garcia and Lee Westwood, who are also in the field for the CIMB Classic starting Thursday in Kuala Lumpur, and they had some advice for Love and other PGA Tour players who are getting accustomed to playing more regularly outside of the United States.

No. 4 Garcia, the highest-ranked player in the field, is making his first appearance since the Ryder Cup and will play in a group with Europe teammate Westwood and American Patrick Reed, who were also part of the contest at Gleneagles last month.

As a player skipping between the PGA and European tours, Garcia said the key to handling the travel is enjoyment and rest.

“It’s just a matter of getting used to it and trying to take it with the best attitude possible,” Garcia said Wednesday. “The hardest thing is getting used to the jet lag and stuff like that.

“I go through stretches when I play but also through some stretches of maybe two, three or four weeks off like I just had, mainly because traveling is nice but it also takes energy out of you and sometimes you need to disconnect a little bit and recharge those batteries.”

Westwood won the Malaysian Open on the Kuala Lumpur Golf and Country Club course in April, winning the co-sanctioned European Tour and Asian Tour event by six strokes. He shared some thoughts on how to approach the energy-sapping conditions in Southeast Asia.

“I don’t think there’s any real way to get over jet lag, certainly I can testify to it,” Westwood said. “I would imagine if you don’t travel much, then it comes as a bit of a shock with a 12-hour time change from the East Coast of America.

“It’s really important to stay fueled and well-hydrated first and foremost. You’re not to going to function if you get dehydrated out there and lose energy. Your brain is going to stop working.”

It’s all noted by Love, who plans to broaden his horizons.

Love is now eligible for the Champions Tour and plans on playing some tournaments on the 50-and-over circuit through the year, but the former U.S. Ryder Cup captain will concentrate principally on the PGA Tour to earn some FedEx Cup points and target tournaments where he does not get an exemption for his 20 tour victories.

“The British Open is the only real trip I’ve made,” Love said. “Now family and business will allow me to expand my horizons a little bit, so I’m going to try to play a little bit more all around the world, try to play in some of these events that I’m invited to.”

“At 50 years old, now I can start my world travels I guess.”

Doctors had told Love he will need another six to eight months to get back to his peak strength, but he is eager to get his game up to speed quickly and recapture the form that saw him win the PGA Championship and finish runner-up in three other majors during the late 1990s.

“I seriously want to play a lot of PGA Tour golf the next few years and see if I can get my game back,” Love said. “Now I can see the light at the end of the tunnel and I know my time in the game will eventually fade away, but I want to take advantage of that for as long as I can and continue to compete.”