From early childhood, golf was focus for Lucy Li 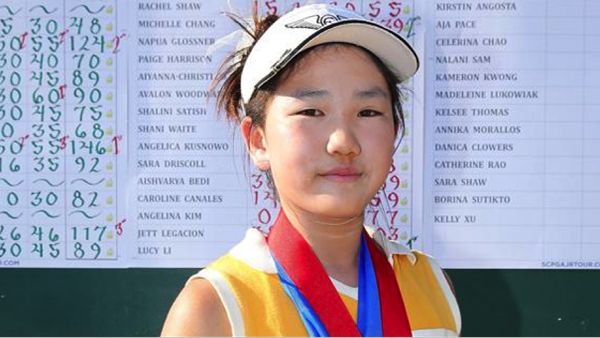 SAN FRANCISCO – Jim McLean has coached child prodigies at his golf schools around the world for decades, so he thought he had seen just about every kind of young hopeful out there.

The 11-year-old from the suburbs south of San Francisco became the youngest player to qualify for the U.S. Women’s Open by winning the sectional at Half Moon Bay in California by seven strokes last month. Her journey to Pinehurst No. 2 in North Carolina, where the tournament begins Thursday, is the quickest and most unique of anybody in the field.

A sixth grader with braces and a sharp short game, Li’s family came to California from Hong Kong and she has been training at McLean’s golf school in Miami since she was 7. As he has with many young golfers when they arrive, McLean gave her the Dr. Seuss book, “Oh, The Places You’ll Go!”

Li not only read the book. She memorized it.

That much is clear. Little else about Li’s life is. Her family has declined interview requests, only issuing a statement through the USGA that she is honored to play in the prestigious tournament.

Those who have watched Li’s rapid rise tell a story of a girl who skips down fairways and brings candy bars to club members, a focused competitor with a powerful swing and polished putting, and a youngster whose family has dedicated time and money to grow her game.

McLean said Li is homeschooled through an online Stanford University program and spends the winter months training with him in Miami, where she is watched over by her aunt, Tao Zeng, an eye doctor. The rest of the time Li spends in Silicon Valley with her father, Warren Li, a computer consultant, and her mother, Amy Zeng, a former table tennis player who works in the technology industry, he said. Li’s brother, Luke, studies at Princeton.

McLean said Li’s mother tried pushing her toward other activities such as music, ballet and aerobics. But Li’s brother played golf competitively, and she wanted to be just like him.

“She started to like golf, and then all she wanted to do was golf,” McLean said. “It didn’t come that easy for her. She worked.”

Joby Ross is a golf instructor at Mariners Point in Foster City, just a few short miles from Li’s home in Redwood Shores. Ross remembers Li’s brother and cousin practicing at the course first, but the family later turned their attention to Li after she began whacking a few balls on the range while waiting for them to finish a tournament.

“They were very serious with her more than the other two,” Ross said. “Her mom and her aunt were always with her. They would use the practice and short-game area for hours on end. I’d see them in the morning and they’d bring a lunch with them, and they’d stop and have a little lunch break and continue practicing, chipping and pitching and they’d go onto our grass tee where they could hit shots. It was a pretty extensive practice session for a young kid.”

Ross had his concerns about whether Li’s family pushed her too hard at an early age. A few times, he saw her having a tantrum with her mom and aunt.

“She was crying and I asked, `What was the problem?'” Ross recalled. “She seemed pretty frustrated and I thought, `Well, maybe they were making her be out there too long.’ And they said, `Oh, she’s just upset because we have to leave, and she wants to stay.'”

Hollis Kelley, an instructor at Cinnabar Hills Golf Club in San Jose, said Li plays the course often when she is in California. He said Li is a favorite in the pro shop, where she often hands out Quaker Chewy chocolate chip granola bars to the staff.

“For her size, she has extraordinary power,” Kelley said. “Because of her stature, at this point she couldn’t overpower a golf course. But pound for pound, she’s very powerful. She has a great short game. Her game is pretty boring. She doesn’t make a lot of mistakes. She shoots a couple under par and it just seems like it’s an everyday thing for her.”

Li captured the girls’ 10-11 division at the inaugural Drive, Chip and Putt contest at Augusta that preceded the Masters this year. Then she beat second-place qualifier Kathleen Scavo by seven strokes at Half Moon Bay to surpass the mark set by Lexi Thompson, who was 12 when she made it to the 2007 U.S. Women’s Open at Pine Needles.

McLean also coached Thompson – along with several other PGA and LPGA players over the years – but thought Li was too young to train when her mother first called him. He said he changed his mind after Li and her mother met with him in Miami, when he saw the family’s commitment and Li’s love for golf.

“I couldn’t turn them down,” he said.

McLean said he has put a heavy emphasis for Li to play the course instead of practice on the range. He said Li has made the biggest strides with her short game since she arrived, and her consistent ball-striking ability and concentration is rare for a golfer of any age.

Even still, he believes making the cut at the U.S. Open is asking “way too much” of Li – and not just because of her age.

“I don’t think that’s a reasonable expectation for anybody playing one LPGA event a year,” he said. “But it wouldn’t be the first time she’s surprised us.”