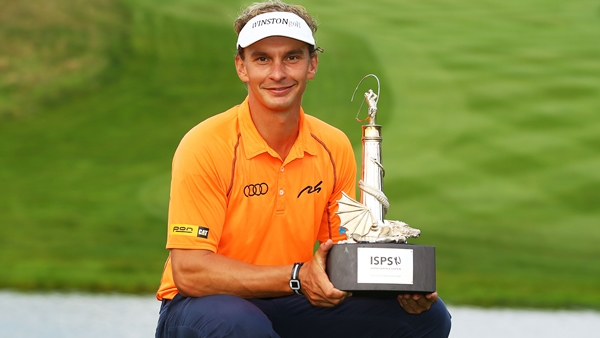 NEWPORT, Wales – Joost Luiten overcame a shaky start to shoot a level-par 71 and hang on for a one-shot victory at the Wales Open on Sunday.

Luiten opened with two straight bogeys but bounced back with three birdies on the back nine and then recovered from a poor tee shot on the 18th to make par for the victory. The Dutchman, who had led by two shots after the third round, finished with a 14-under total of 270.

It was Luiten’s third European Tour victory and comes after he was overlooked as a captain’s pick for next week’s Ryder Cup in favor of Lee Westwood.

“I knew when the qualification ended I needed to play better so luckily I’m in good form now,” Luiten said. “I just wish the team all the best and hopefully they can win.”

In contrast, Westwood struggled over the final day with five bogeys on the front nine, and added a double bogey on the 14th before closing with two late birdies for a 76. He plummeted to a share of 60th place at 2 over.

“I needed to play some competitive golf and I’ve done that,” Westwood said. “I hit a few good shots this week, not so good today, but I probably had one eye on next week. I don’t think the concentration and the focus was there.”

Thomas Bjorn heads to his third Ryder Cup, and his first in 12 years as a player, after closing with a 74 and finishing just one shot ahead of Westwood.

“It’s been a strange week,” Bjorn said. “I didn’t play particularly well early on but played pretty well on the weekend, but didn’t score that well with my putter letting me down. But if that’s all I have to work on then that’s pretty good for my concentration levels going into the Ryder Cup.”