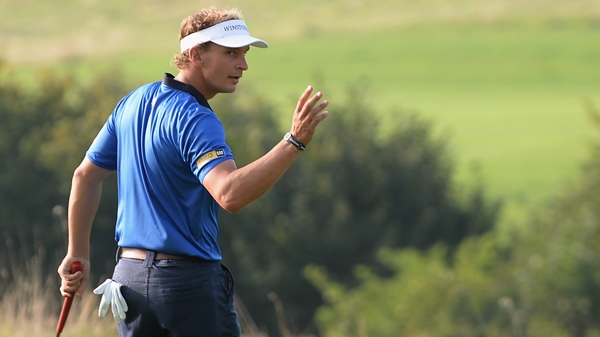 NEWPORT, Wales – Joost Luiten birdied three of his closing four holes in a 6-under 65 at the Wales Open on Saturday to take a two-shot lead.

The three-time European Tour winner came from a stroke back at the start of the third round to overhaul Ireland’s Shane Lowry (68) and move to a total of 14-under 199 in ideal scoring conditions on the Twenty-Ten course at Celtic Manor.

The 28-year-old Luiten arrived in Wales having finished fifth in his defense of last week’s KLM Open title and is now primed to become the first Dutch-born winner of the Wales Open.

“I played solid, consistent, hit a lot of greens, and got my round going with some nice putts at the beginning,” Luiten said. “I didn’t really make a lot of putts in the middle part, but came back strong at the end with three birdies on the last four so I have to be happy.”

He could have finished three clear of his rivals when his long eagle putt from the back of the green at the 18th hit the edge of the hole before Luiten managed the sixth birdie of his round from four feet.

Luiten finished 15th overall on the European Ryder Cup points table but was overlooked for a wild card pick by the 16th-placed and eight-time Ryder Cup star Lee Westwood.

“Since the qualifying process ended I have been fourth and then fifth last week, so if you have these last couple events counting for the qualification of the Ryder Cup, maybe I may have had a chance,” Luiten said.

“Bu then we know the date when qualification ends and you have to play well before that and I didn’t do that.”

Lowry got the start he wanted to his third round with birdies at Nos. 2, 3 and 6 but the Dubliner stalled to then par his closing 12 holes.

“I’m still there and that’s the main thing,” he said. “If you had given me this Thursday morning before I stood on the first tee, I would have taken your hand off. “

Former Welsh Open winner Thongchai Jaidee of Thailand shot a 67 to share third on 11 under with Frenchman Gregory Havret who signed for a 66.

European Ryder rookie Jamie Donaldson continues to impress, shooting a 68 to move to 8-under overall while Westwood jumped 23 spots with a round of 68 to be in a share of 32nd on 3 under.

However, Dane Thomas Bjorn slipped two dozen spots with a round of 71 and is tied in 46th position at 2 under.