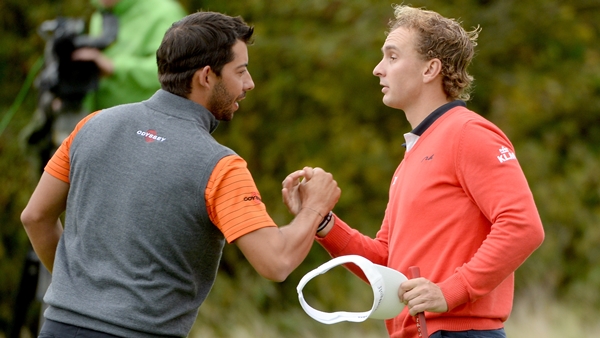 The Dutchman demoralized Larrazabal with seven birdies in overcast and wet conditions on the London Club course at Ash in Kent outside London, setting up a semifinal against Finland’s Mikko Ilonen.

In the other semifinal on Sunday, Henrik Stenson will take on George Coetzee of South Africa.

Stenson defeated Swedish compatriot Jonas Blixt by 2 holes with a birdie at the last, Coetzee eliminated American Patrick Reed 2 and 1.

Luiten won all three round-robin matches and was handed the first hole when Larrazabal found water guarding the green. He went on to win the second, fifth, sixth, seventh and the 11th before claiming victory with a par on the 13th.

“I had a great start with three birdies to be 2 up, so that was a really nice start and after that I just tried to keep going and tried to keep the momentum going,” Luiten said. “While I am unbeaten every match is a new game, and you can lose at any time. To have a 100 percent record doesn’t say anything in this format. So I just have to go out again tomorrow and try to do the same, and make birdies and try and beat your opponent.”

Ilonen defeated European Ryder Cup-winning rookie Victor Dubuisson 2 up in a see-saw match, with the Finn producing a bogey-free display while his French opponent three-putted on three of the four par-3s for bogey.

“It was a match that could have gone any way today but I was pretty confident I would come out in the end,” Illonen said. “But one of the keys for me this week is that I have not felt nervous compared to other occasions when I have competed in big tournaments.”

Coetzee, the highest-ranked player in the field at No. 89, was never behind in his match against Reed.

“I was playing well coming into this week and the name of the game in match-play is not give away any holes and I managed to do that,” Coetzee said. “But you’re playing man-on-man and it’s the closest you get to contact sport in golf.”