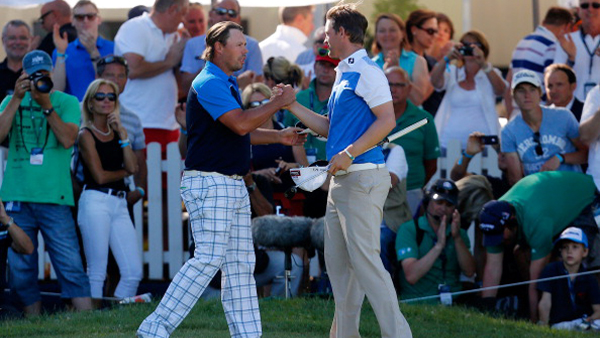 ATZENBRUGG, Austria – Mikael Lundberg ended a six-year title drought with a gutsy 40-foot putt in a playoff against Bernd Wiesberger to win the Lyoness Open on Sunday.

The Swede birdied the first playoff hole to deny Wiesberger a second victory at his home event after 2012. It was Lundberg’s third European Tour title after winning the Russian Open in 2005 and 2008.

“It feels fantastic, it was very nice. I made a fantastic putt,” said Lundberg, who was six strokes off the lead overnight. “I knew I was far behind and I even didn’t think I was going to win. I was just hoping to play well.”

Lundberg, who made three birdies in a row on his way to a 65, and Wiesberger, who shot 69, were tied at 12 under after the fourth round.

Defending champion Joost Luiten, who teed off the final day with a two-shot lead over Wiesberger, carded a par 72. The Dutchman finished third, one stroke off the lead.

“I didn’t play great,” Luiten said. “Nothing went my way, really … If you are two clear, you want to win, you want to finish it off. If you don’t do that, you are disappointed.”

England’s Lee Slattery, who was second after Friday’s play, scored 66 to finish another stroke back in fourth.

Lundberg topped the leaderboard for the first two days but looked to have squandered his chances with a 4-over 76 on Saturday.

“I felt a little bit more pressure going into the third round since I was leading,” Lundberg said. “Today was slightly better, not the long shots, but my short game was very good. That changed everything.”

Lundberg’s improved short game helped him overcome several disappointing seasons that left him wondering if he was ever going to win a title again.

Just weeks ago, he started working with coach Neil Jordan, and said he has been gaining confidence from the cooperation.

“I have been struggling,” said the 40-year-old Lundberg, who came through Q School for the last three years. “We started working on a few things. Not very different things, just basics … I worked a little bit more on my short game which is now starting to pay off.”

It was Lundberg’s second win in a playoff after the Russian Open in 2005 . With a victory, Wiesberger would have become the first Austrian to qualify for the U.S. Open. He can still make it but is now dependent on results from the St. Jude Classic in Memphis, Tennessee, later Sunday.

Wiesberger was loudly cheered through the sun-soaked day by a large home crowd. He soon overtook Luiten with birdies on the first and third hole and stayed ahead of the Dutchman almost throughout.

However, he lost a one-stroke lead over Lundberg with three holes to play.

“I had it in my hands,” Wiesberger said. “He had a great putt, he deserves it but I lost it a bit. I didn’t play great.”

Daniel Im of the United States carded the lowest score of the tournament with a 8-under 64 despite double-bogeying the par-4 fifth. Im had 10 birdies including five on the final six holes to finish 7 under for the tournament.