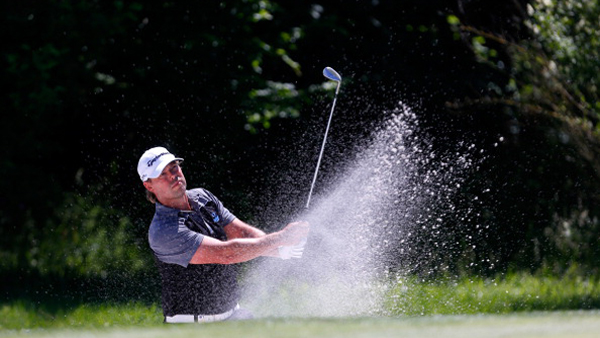 ATZENBRUGG, Austria – Mikael Lundberg exploited perfect playing conditions for early starters in the second round of the Lyoness Open on Friday in a bid for his first European Tour title in six years.

In sunny and almost windless conditions, the Swede shot four consecutive birdies on the front nine on his way to a 68 and went 9 under for a one-shot lead over England’s Lee Slattery and two over Paraguay’s Farbrizio Zanotti (68).

Slattery carded a 6-under 66, which started with three birdies on the first four holes and was rounded off by an eagle on the par-5 16th.

“I hit some really, really good shots today,” said Lundberg, who won the Russian Open in 2008. “Starting early means the course was slightly softer. On the back nine it started to dry out and that it made it harder.”

Lundberg said he had been “working really hard the last couple of months so I am glad it pays off.”

England’s Adam Gee, who shared the overnight lead with Lundberg, hit a 73 and dropped to 4 under for the tournament, while Sihwan Kim of South Korea improved to 6 under with a 68.

Defending champion Joost Luiten and Rhys Davies of Wales followed at 5 under.

Slattery missed the cut in his last four events but has regained his confidence at the event where he finished ninth last year.

“We moved house, got married and had a baby so it’s been a really hectic six to nine months,” Slattery said. “It’s nice to find a little bit of form.”

Luiten, who finished the opening day on level par, put himself back in contention with a 5-under 67. Starting on the back nine where he dropped three strokes on Thursday, the Dutchman avoided bogeys this time and hit five birdies in total.

“It was a bit easier as there was no wind today. My swing felt a bit better,” Luiten said. “You have to be on the fairway, otherwise you’re in trouble. Five under is a good score, I am definitely back in there.”

Home favorite and 2012 champion Bernd Wiesberger improved to 3 under with a 70 but Miguel Angel Jimenez, a two-time winner this season, dropped to 1-over par. The Spaniard carded a disappointing 75 after suffering three double bogeys on Nos. 7, 10 and 11.