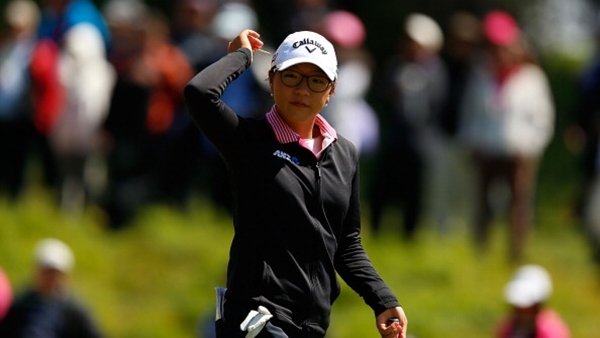 DALY CITY, Calif. – Poised and unflappable, Lydia Ko birdied the final hole for her third LPGA Tour victory and first as a professional, holding off Stacy Lewis and Jenny Shin on Sunday in the inaugural Swinging Skirts LPGA Classic.

It went down to the final shots, and the teen made a 6-foot birdie putt moments before Lewis knocked in a 4-footer of her own to finish one stroke back.

“The 18th hole I knew how loud the claps were and that I needed to get close and give myself a birdie chance,” Ko said.

After beginning the day a stroke behind Lewis, Ko birdied three of her final four holes on the front nine on the way to a 3-under 69 and 12-under 276 total at Lake Merced.

Ko earned $270,000, celebrating on the 18th green three days after celebrating her 17th birthday at the first tee box with the gallery singing “Happy Birthday.”

Ko will move up two spots to No. 2 in the next world ranking.

She won the Canadian Women’s Open as an amateur the last two years and took the Swinging Skirts World Ladies Masters in December in Thailand in her second start as a professional. She has six victories in pro events, also winning in Australia and New Zealand.

Lewis will head to her home state of Texas next week looking to build on a disappointing near miss in which she struggled all day with her short game.

“I knew she wasn’t going away. Lydia played great,” Lewis said. “Every time I hit a shot in there, she answered.”

Shin, still looking for her first tour win after her best finish this year, finished at 10-under 278 with a 68 over the 6,507-yard course.

Playing together for the fourth straight day, neither Ko nor Lewis hit any dazzling shots early. Ko’s second of three bogeys came on the 417-yard, par-4 seventh in which her tee shot hit a tree and dropped in the rough. Lewis’ 10-foot birdie putt on No. 9 lipped out.

Ko pulled into a first-place tie at 10 under as they made the turn on a picture-perfect spring day.

“The front nine, I did everything I wanted to do, the putts just didn’t go in,” Lewis said. “I expected her to do exactly what she did today. … She hit every shot she needed to make from 13 on in.”

The third-ranked Lewis had her sixth runner-up finish since winning the Women’s British Open in August.

Michelle Wie, who won last week in her home state of Hawaii, tied for ninth at 2 under. Second-ranked Suzann Pettersen shot a 70 finish at 3 over in her first event since last month after missing three tournaments with a back injury. Top-ranked Inbee Park tied for fourth at 6 under.

The weather held for the final day after both fog and rain delays earlier in the tournament.

This event was the LPGA’s first in the Bay Area since the 2010 CVS/pharmacy LPGA Challenge at Blackhawk in Danville.