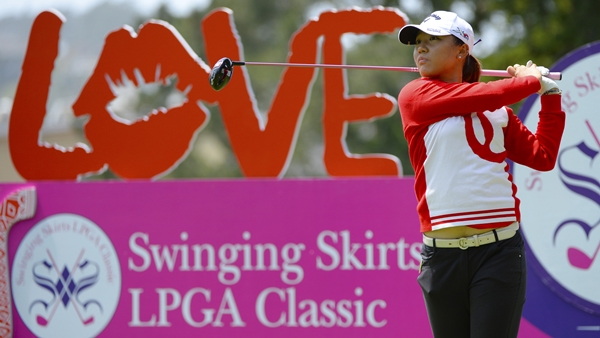 DALY CITY, Calif. – As Lydia Ko geared up to turn 18 on Friday at the Swinging Skirts LPGA Classic, right behind her on the leaderboard was 54-year-old Juli Inkster.

Refreshed and ready to make a run at defending her title, the top-ranked Ko returned from two weeks off to take the first-day lead Thursday at 5-under 67.

Ko nearly chipped in for eagle on the par-5 14th, but the ball deflected off the pin and she settled for a tap-in birdie putt, and that moved her to the top of the leaderboard at Lake Merced Golf Club.

“This is a very tough golf course. You need to position yourself well,” Ko said. “I hit the ball pretty good where I wasn’t in too much trouble. If I did miss it a little bit, I did get away with it, too. It’s a really good start but I know I’ve got three long days to go.”

Ko will celebrate her birthday on the course Friday then go out for a nice dinner with friends. Paired with Anna Nordqvist and Lexi Thompson, Ko pulled on a jacket midway through her round in the afternoon chill and finished strong.

Ko had a one-stroke lead over three others, including Inkster. Stacy Lewis, last year’s runner-up to Ko at Lake Merced, was two strokes back at 69.

“It was probably one of the craziest rounds of golf I’ve ever played,” said Lewis, who recovered from four bogeys on her front nine with an eagle on the par-4 11th and three birdies on the back.

“The first couple holes were playing down wind, so that made it a lot easier,” she said. “A lot depends on the wind. It really depends on the conditions of the day and the scores are really good.”

Ko was followed by a gallery of about 100 fans early, and first-day attendance seemed to be a noticeable improvement from a year ago for the tournament’s inaugural round. The wind picked up significantly in the afternoon.

Inkster, done hours earlier before the wind began whipping in earnest, quickly corrected the notion she is facing a talented LPGA field with women her daughters’ ages.

“Yeah, they’re a lot younger than my daughters,” she said with a grin. “They’re 25 and 21. Out here that’s a seasoned veteran. You know what, that’s the beauty about golf. I mean, age matters in a lot of things as far as how your body feels and how far you hit the ball and how much time you can put into it. You can still go out there and compete at 54.”

Inkster, a local icon, birdied six of her first 10 holes for a 68 on a cool, breezy morning off the ocean. She had no idea that put her on top of the leaderboard after the morning rounds.

“I didn’t know I was,” Inkster said. “The way I played today, no, I’m not surprised. … Coming into this week, my game feels pretty good.”

Lewis joked that a leaderboard with Inkster on top would make a good “Throwback Thursday” photo.

British Columbia’s Sue Kim carded a 72 Thursday for a share of 28th.

Back for a second straight year at Lake Merced in the San Francisco suburbs, the tournament drew 18 of the top 20 players in the world – and it would have been one more before eighth-ranked Suzann Pettersen withdrew Wednesday because of an ailing shoulder.

Paula Creamer was at risk of missing the cut after a 10-over 82. She had four bogeys and a pair of double bogeys.