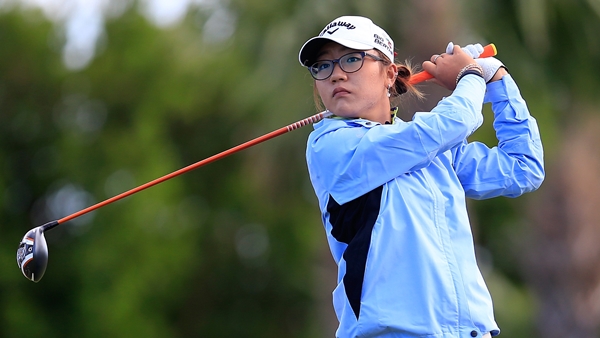 PARADISE ISLAND, Bahamas – Lydia Ko took a share of the lead in her first start as an LPGA Tour member, matching Meena Lee with a 5-under 68 on Thursday in the season-opening Bahamas LPGA Classic.

The 16-year-old Ko turned pro late last year. She won the Canadian Women’s Open the last two years as an amateur and closed last season with a victory in a non-tour event in Taiwan in her second pro start.

Ranked No. 4 in the world, the South Korean-born New Zealander had six birdies and a bogey on Atlantis Resort’s Ocean Club course.

“I just tried to play my own game and be relaxed,” Ko said. “I got off to a shaky start and I needed to make a 4-footer for par, but when I made birdie at No. 2, I was able to relax. I was actually shocked that I wasn’t nervous. I felt I even played better than my score. I gave myself a lot of opportunities.”

Lee, from South Korea, eagled the par-4 13th and had four birdies and a bogey.

“I had a wintertime working hard, so that’s why I have more confidence than last year,” said Lee, a two-time winner on the LPGA Tour. “That’s why I feel very good and happy to play in the first tournament.”

“When she gets some confidence in herself, the rest of this tour better watch out,” Lewis said. “When I saw we were paired together, I was pretty happy. She is just a really likable kid. …

“I think our games are very similar, just the way we play. We both hit it solid and make some putts. She rolled it great today. For the first seven, eight holes, she made everything she looked at.”

Lewis had five birdies and a bogey.

“I thought I’d be a little bit more rusty than I was,” Lewis said. “But I got off to a good start, and really just hit the ball really solid and was able to control some shots in the wind and the shots that I saw I was able to pull off. I was really happy with the way I hit the ball.”

“Over the last month hearing the word change, it could pretty much be my middle name,” Ko said.

Lewis also commented on all the changes Ko has made.

“You can change your clubs, your coach, all these things, but she’s still the same person,” Lewis said.

Jaye Marie Green had a 71. The 19-year-old Green won the LPGA qualifying tournament by 10 strokes last month, finishing the 90-hole event at a record 29 under.

Defending champion Ilhee Lee opened with a 74. Last May, the inaugural event was reduced to three 12-hole rounds because of flooding.

Rebecca Lee-Bentham of Toronto leads the five Canadians in the field after shooting a 1-over par 74. She’s tied for 60th.