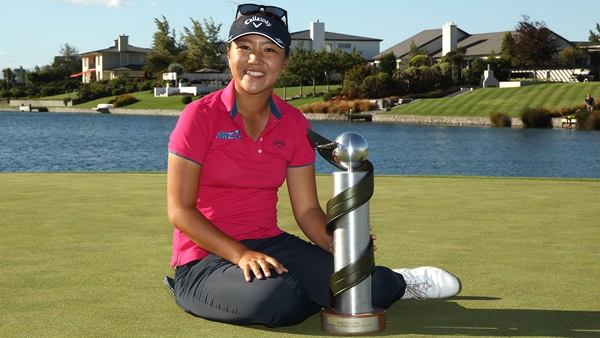 The 17-year-old New Zealander, the Women’s Australian Open winner last week for her sixth LPGA Tour title, closed with a 1-under 70 at Clearwater for a four-stroke victory.

“I really wanted to win in front of such great crowds,” Ko said. “This is probably the biggest crowd I’ve seen. It’s always cool winning on home ground. We were walking up 16 and (playing partner Giulia Sergas) said `They like you.’ I said, `Well, it’s home.'”

She has 10 worldwide victories in professional events, also winning at Clearwater as an amateur in 2013.

“The more Ws the better,” Ko said. “I think I had a really good (offseason) break, which got me fresh going into this year.”

On Saturday, Ko broke the course record with a career-best 61 to take a three-stroke lead into the final round. She had five birdies, a double bogey and two bogeys Sunday to finish with a tournament-record 14-under 202 total.

“This is even better than I would ever have imagined,” Ko said. “It’s just great to have won the two Opens back to back.”

Australian amateur Hannah Green was second after a 68.

Denmark’s Nanna Koerstz Madsen was third at 9 under after a 71.

England’s Charley Hull had a 75 to tie for sixth at 7 under.

Hull pulled within two strokes of Ko with an eagle on the par-5 10th. She fell back with a double bogey after hitting into the water on No. 12 – Ko birdied the hole for a three-shot swing – and bogeys on Nos. 15, 17 and 18.

The tournament was sanctioned by the European and Australian tours.