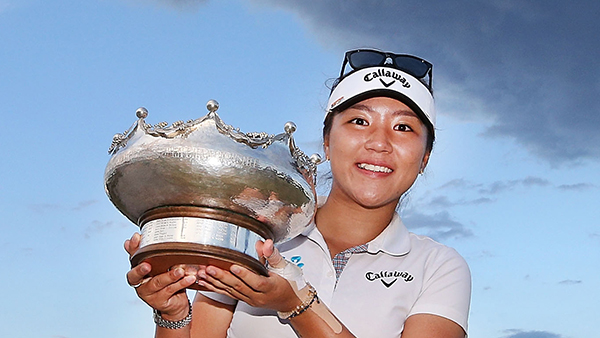 MELBOURNE, Australia – New Zealand’s Lydia Ko made her second start as world No. 1 a winning one, shooting a final-round 2-under 71 for a two-stroke victory over South Korea’s Amy Yang in the Women’s Australian Open.

The South Korean-born Ko finished with a 72-hole total of 9-under 283 on the composite course at Royal Melbourne. Yang shot a final-round 72.

Ariya Jutanugarn of Thailand, who was tied with Ko after three rounds in the LPGA, European Tour and Australian Ladies event, shot a 76 to finish third, five strokes behind Ko.

As the leading groups were making the turn, play was suspended for about an hour due to nearby thunderstorms and the threat of lightning.

While Ko had just dropped a shot on the eighth, Yang had birdied the ninth hole and was ready to putt for an eagle on 10 when the siren to stop play sounded. Yang settled for a birdie after her ball circled the hole but failed to drop.

It gave Yang the lead but it didn’t last long with Ko adding two birdies on the back nine.

“I think that break was really good for me,” Ko said. “I had some lunch and got my stuff together there and I played much better after that.”

Ko’s accomplishments also include being the youngest golfer to win a professional event after capturing the New South Wales Open when she was 14.

“I’ve always played well in Australia, so it’s always cool coming back here,” she said. “It’s great. I played pretty solid. I think that’s a really important thing and to win on such an amazing golf course.”

South Korean-born American Jenny Shin birdied the last two holes for a four-under 69, the low round of the day, to move into a tie for fourth with first-round leader Ilhee Lee, seven behind Ko.

Lee closed with 71 but a second round of 82 all but ended her chance for victory.