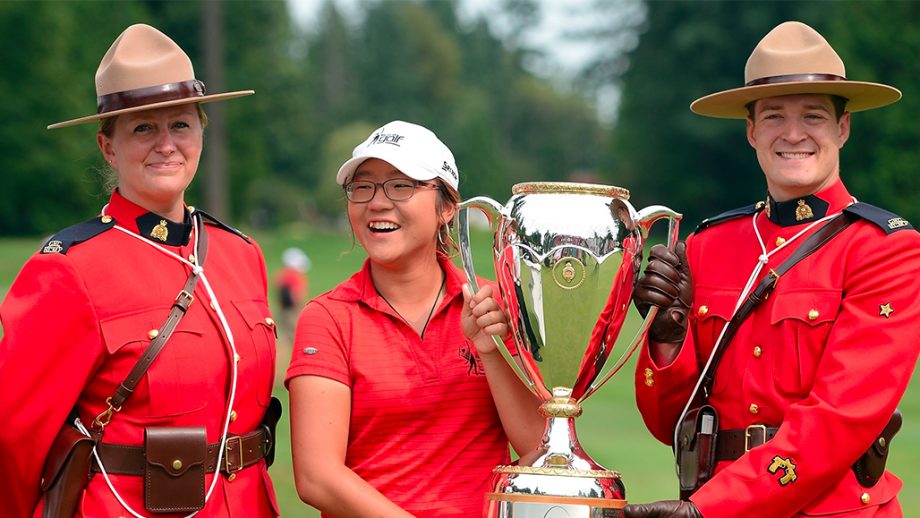 In July, the LPGA Tour released the latest in its series of Drive On videos – showcasing the journeys its players have gone through to get to the biggest stage in golf, while also connecting fans with the real person behind the clubs.

For Lydia Ko, whose video has since drummed up tens of thousands of views, her Drive On story got started in Canada. And she’s never forgot that.

“I’m questioning if I’m actually Canadian with how nice Canada has been to me,” Ko said on a Zoom interview, with a laugh.

Indeed, the now 23-year-old burst onto the LPGA Tour with a victory at the 2012 CP Women’s Open. At the time she was just 15 years and four months – the youngest-ever winner of an LPGA Tour event.

The following year Ko won the CP Women’s Open again – and was still an amateur – by five strokes.

After turning professional in 2014, Ko would go on to win the CP Women’s Open again in 2015. In the process she became just the third golfer in the event’s storied history to have three titles to her name (the others being Americans Pat Bradley and Meg Mallon).

When Ko was 15 she came to that year’s CP Women’s Open at Vancouver Golf Club having just won the U.S. Women’s Amateur, so, she said, she was “walking on air.”

“I just was so excited to be out there and play with these ladies that I had really seen on magazines and TV not too long ago, and for some of them to come up and even say ‘hi’ to me… I didn’t have a lot of experience playing on the LPGA before, so it was just cool being in that vibe,” she said.

“I just remember that week I said, ‘hey, now I just want to make the cut and go from there and just kind of experience what it’s like playing on the LPGA alongside the best female golfers,’ and that week turned out to be like so much bigger, better, greater than I could have ever imagined.”

Ko said she was actually invited to play in another event on a different tour that week eight years ago, but she opted to play the CP Women’s Open.

And of course, she’s very happy she did.

“If we can make a little bit of a good difference in other people’s lives, it makes the whole thing worth it.”

“I was like, whoever made the final decision (to play in Canada) did a stellar job. I’m so glad I played it,” she said.

Ko’s career, outside of her three wins in Canada, as been nothing short of spectacular.

She’ll be the first to admit that she’s had ups and downs as it relates to caddies and coaches – she now works with Canadian Sean Foley – but there’s no denying how impressive this resume is: 15 LPGA Tour titles, two major championships, past Player of the Year, former No.1 in the world, and the youngest to ever earn $1-million in a season.

Even with all the accomplishments, Ko (who of course is not Canadian, but from New Zealand – and has been named New Zealand’s sportswoman of the year three times) stays humble when asked about being a role model for the next generation of golfers out there.

She laughs at the statement, as she is only in her early-20’s herself, but knows there are teenagers who, like her, are nearly ready to make the leap to the LPGA Tour.

While acting as a role model to so many, she cites some big names that have been helpful as well.

“It’s been so amazing to have lots of role models that you really look up to and say, ‘hey, I want to be the next Se Ri Pak or the next Annika Sorenstam, the next Brooke Henderson.’ But at the end of the day all you can do is really, like I said earlier, be the best version of you,” said Ko.

“I think as long as you’re working hard and having fun while you’re doing it, that’s all you can do.  Sometimes I think we just try and make it so much bigger than it already is, and it makes it look a lot more complicated.  But as long as you’re having fun and as long as you have belief in yourself, that’s what really matters.”

Ko will have another opportunity to inspire young Canadian golfers at next year’s CP Women’s Open when it returns to Vancouver and Shaughnessy Golf & Country Club in 2021. She’ll go for her record fourth CP Women’s Open title next year after the 2020 edition was cancelled due to COVID-19.

She said she’s super excited to return to Vancouver specifically.

She visited the city in 2019 for an event with Canadian retailer Lululemon and even visited a Korean restaurant that had the same name as her sister (“It’s called Sura and it was probably hands down some of the best food I’ve had in my life,” she said). She complimented CP as an “incredible sponsor and supporter of the LPGA” and has heard Shaughnessy is one of the top courses in the country.

She joked, even, that Coquitlam should change it to K-o instead of C-o because of her success and her love (“I actually would love to live in Vancouver,” she said) of the area.

So while Ko’s Drive On story has circled the globe, and she’s reached the top of golf’s mountain already, her connection to Canada is undeniable.

“Every time I go back to Canada,” she said, “it actually makes me feel like I’m home.”