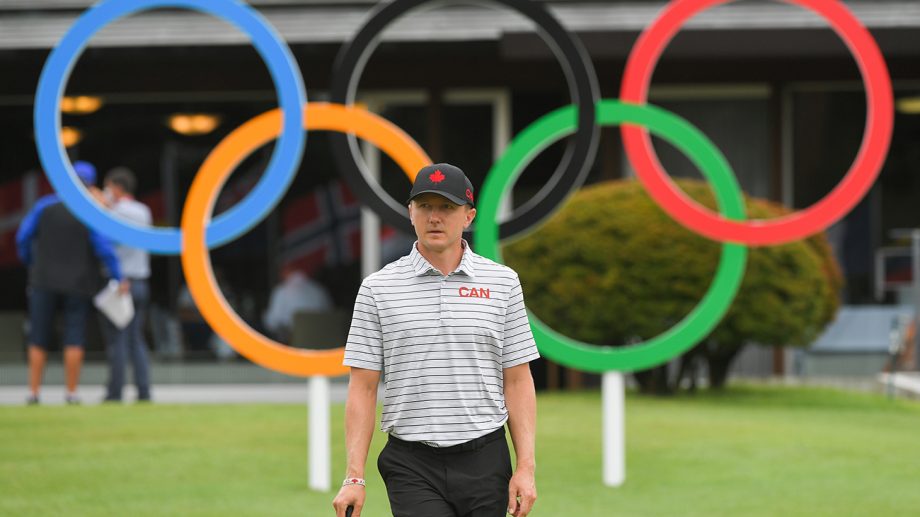 SAITAMA, JAPAN - JULY 27: Mackenzie Hughes of Canada practices prior to the Men’s Individual Stroke Play event on Day 7 of the Tokyo 2020 Olympics at the Kasumigaseki Country Club on July 27, 2021 in Saitama, Japan. (Photo by Ben Jared/PGA TOUR/IGF)

They played golf together as juniors.

Then, were college teammates.

Both play on the PGA Tour.

Now, they are Olympians.

Corey Conners and Mackenzie Hughes will be making their Olympic debut in Tokyo, with the men’s golf tournament happening from July 28-31 at Kasumigaseki Country Club. The two Canadians share many stops along with their respective golf careers. Add representing Canada at the Summer Olympics to that list.

“It’s going to be awesome,” Conners said on a Zoom media availability prior to the Olympics. “Neither of us would have ever thought that we’d be Olympians or PGA Tour winners and continue to be great friends, but this is amazing. Hard to believe it happened.”

Conners and Hughes were born a mere 114 kilometres away from each other in Listowel and Dundas, Ontario respectively. They each met at Listowel Golf Club for a junior golf event when they were 12 years old. Flash forward to the present and the pair from small towns are sporting the red and white at the Olympic Games in Tokyo.

Both golfers experienced success as juniors. Hughes enrolled at Kent State University in 2008-09, with Conners joining him two years later. Under the leadership of Kent State golf coach Herb Page, Conners and Hughes propelled the program to the final eight of the 2012 NCAA Championship.

Conners won the Ontario Junior Championship in 2010. Hughes secured back-to-back victories in the Canadian Amateur Championship in 2011 and 2012. In 2012, both Conners and Hughes earned spots on the Canadian national junior team, coached by Derek Ingram. Competing in the World Team Amateur Competition in Turkey, Hughes, Conners, and Toronto native Albin Choi placed sixth.

“This is a very big event for both of them and I know they’re really looking forward to competing and trying to win a medal for Canada, with a long-time friend and teammate,” Ingram said. “For me, I couldn’t be more happy to be coaching long time students and great people who I’ve worked with for many years.”

It didn’t take Hughes long to record his first professional victory, the Cape Breton Celtic Classic on the Mackenzie Tour in 2013. Three years later, Hughes won on both the then Web.com Tour (Price Cutter Charity Championship) and the PGA Tour, winning a five-man playoff at the RSM Classic.

Conners, after turning pro in 2015, waited until the 2019 Valero Texas Open to win his first PGA Tour title. It not only qualified the young Canadian into the Masters the week after but a plethora of major championships the last couple of seasons.

It’s not hard to spot Conners and Hughes at the majors; the Canadians in the field often take a group photo together during a practice round. It speaks to the camaraderie that is felt amongst the Canadian contingent of men’s golfers, both young and old.

The major championships in 2021 provided an opportunity for Conners and Hughes to get in the mix against the best in the world. At the four majors, a Canadian finished in the top-20, and at two of them, Conners and Hughes earned a top-10. The 2021 U.S. Open saw Hughes in the final group on Sunday and Conners in the penultimate pairing during the final round of the latest Open Championship.

These results demonstrate how far Conners and Hughes improved since turning pro and their affinity for the big tournaments. While the two are rookies at the Olympics, they are no strangers to playing against golf’s best players, such as Jon Rahm, Collin Morikawa, or Rory McIlroy.

The Olympics will look and feel no different. No fans and rigorous health protocols define the daily realities for the Olympic athletes due to the global COVID-19 pandemic.

Some top golfers, like World No. 1 Dustin Johnson, are absent from the Olympics, due to the restrictions, the pandemic, and the busy golf schedule. For Conners and Hughes, skipping the Games didn’t cross their minds. They immediately said yes when given the opportunity to compete in the Olympics, not only to represent Team Canada but also how rare this chance is.

Four years ago, Graham DeLaet and David Hearn competed for Canada in Rio, finishing 20th and T-30th respectively. With how well Conners and Hughes are playing coming into this event, coupled with their motivation, there’s no doubt the chance to get on the podium is within reach.

“Hopefully we’ll do a little better and win some medals,” Hughes said.