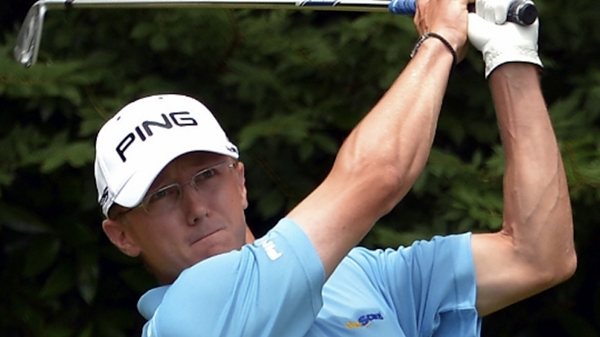 (Hamilton Spectator) – It’s probably a good thing he was named Golden Horseshoe Athlete of the Year. If only to break the string of ridiculously bad luck Mackenzie Hughes has been dealing with recently.

In his first year as a pro, the 23-year-old golfer from Dundas, Ont. led the PGA Tour Canada in earnings, was named player of the year, earned his Web.com Tour exemption for this full season and qualified for the U.S. Open where he narrowly missed making the cut.

“I would definitely have to give it an A,” he says of his season. “I wouldn’t give it an A+. I would’ve liked to be a little more consistent at times.”

So with all this good stuff, what’s all this talk about bad luck?

Well, earlier this month, a little more than a week before the first event of his new season, he was stopped at a red light in his new car — the first vehicle he’d ever bought that had only 1,500 kilometres on it — when another car blasted him from behind.

The force of the blow sent his car flying into the vehicle in front leaving his new ride looking rather accordion-like.

Fortunately he wasn’t injured other than some soreness in his lower back and neck. So he headed off to play that first event in Colombia a few days later. Except his flight out of Houston was horribly delayed. So instead of arriving mid-afternoon, he touched down at 1 a.m.

Which is when he found out the pro-am in which he was required to play wasn’t scheduled for the next day as he’d been told, but for that day. Better yet, he had a 7 a.m. tee time leaving him just a couple hours to sleep in the room he was sharing with Canadian Albin Choi.

Trouble was, getting to the hotel much later than expected meant the staff had filled the place, leaving only one room available. One with a single king-sized bed.

“It was a big bed,” Hughes laughs. “We know each other well enough to say, ‘Here’s the boundary, stay on your side.'”

That could be the end of the story. It isn’t.

When he got to the course in the morning, he had to quickly find and hire a caddie. Yet finding someone who spoke English proved to be a considerable challenge. With some help, he eventually stumbled on Miguel.

“He was maybe five-feet tall,” Hughes chuckles. “He was 68 years old. He was about as big as my bag. I’m thinking, this should work out well.”

And for the first round, it actually did. On the dry, hard course, he played clean and even touched fifth place on the leaderboard before wrapping up at even par. Then about a minute before he was to tee off for Round 2, the heavens opened and near-flood conditions ensued.

When he finally got back onto the course, the track was playing 180-degrees differently than it had during his warmup hours before. The trampoline had become a sponge.

“It cost me probably two or three shots where I probably played the wrong shot,” he says.

Which, of course, caused him to just miss the cut.

So, yeah, this award comes at just about a perfect time. He was due for something good to happen.

Bubba Watson’s new PGA Tour commercial is great, but the outtakes are even better.

The commercial is promoting the newly designed PGATour.com, which launched to mixed reactions. In the first commercial of the campaign, Watson tells the guys who built it “these guys are good.” A play on the long-time PGA Tour commercial starring actual golfers.

Outtakes from the making of Bubba’s commercial are below.

More commercials are set to air featuring Graeme McDowell and Ian Poulter. Go behind the scenes of all three shoots in the video below.