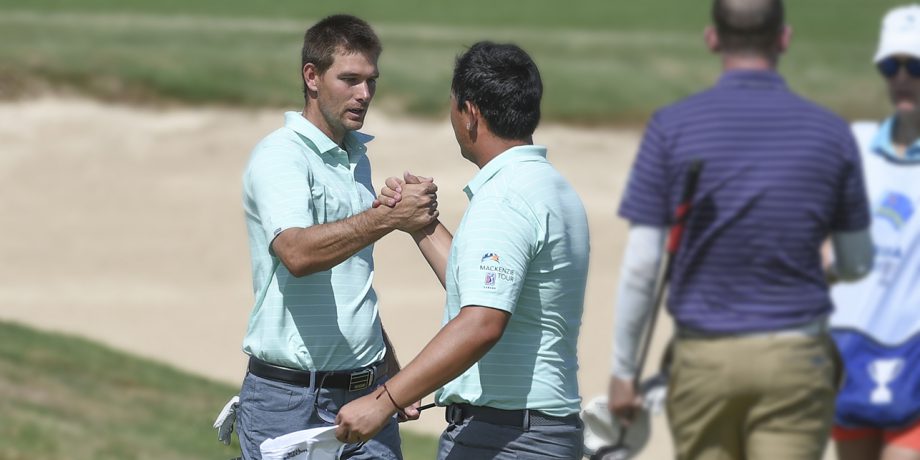 One day after their thrilling win anchor match win in Thursday Four-Ball, T.J. Vogel and Rico Hoey once again provided the exclamation point on the day, closing out their match 3&1 against José Toledo and Jared Wolfe to give the Mackenzie Tour a 3-2 edge in Foursomes play.

“I think it’s great for overall team morale just to win both days. Even though today was just 3-2, it’s a big victory,” said Mackenzie Tour Captain Ben Silverman. “The fact that we were able to pull out a couple of matches at the end, it’s huge.

“We just have a head start, but we still have to go out and win at least four points tomorrow.”

With the Mackenzie Tour holding a 3.5-1.5 lead to start the day, it quickly appeared as though PGA TOUR Latinoamérica would turn things around in a big way on Friday, earning leads on the front nine of the day’s first four matches. The first two points of the day went their way, as Hank Lebioda and Brian Richey defeated Patrick Newcomb and Johnny Ruiz 6&4 while Oscar Fraustro and Nelson Ledesma took down Max Rottluff and Kramer Hickok on the day’s first match 2&1.

From there on out, however, the Mackenzie Tour took over, with Lee McCoy and Chase Wright providing the spark.

Nursing a 1 up lead against Tee-k Kelly and José de Jesús Rodríguez, McCoy emphatically closed the door at the 18th hole by stuffing a 6-iron from 152 yards into a stiff wind to within five feet of the flag, with the birdie eventually being conceded for a 2 up win.

“I think finishing so poorly yesterday, I had a lot of motivation to make up for that half point that I let slip away and was fortunate to come out on the other side of that today,” said McCoy, who bogeyed the 18th hole yesterday to half his Four-Ball match and added that it was important to build on Thursday’s strong start for the Mackenzie Tour team.

“You don’t want to give them too much wiggle room going into singles because that’s where the majority of the points are up for grabs. 10 points are there for the taking to make it interesting, and I’m sure it’s going to be,” said McCoy.

Shelton and Niebrugge closed out their match 5&4 with a flurry of birdies, leaving Vogel and Hoey, who won Thursday’s anchor match in dramatic fashion, in position to turn the momentum fully towards the Mackenzie Tour if they could earn another point.

“I told them they were the swing match, and Rico was like, ‘Aye aye, Captain!’ They were just loose and they pulled it through,” said Silverman.

A pair of solid pars at 15 and 16 earned the Mackenzie Tour tandem a 2 up lead with two to play, and after Toledo’s drive found a fairway bunker and the Latinoamérica squad took five strokes to get on the green, the hole and match were conceded.

The Aruba Cup will resume Saturday morning with singles matches beginning at 8 a.m.