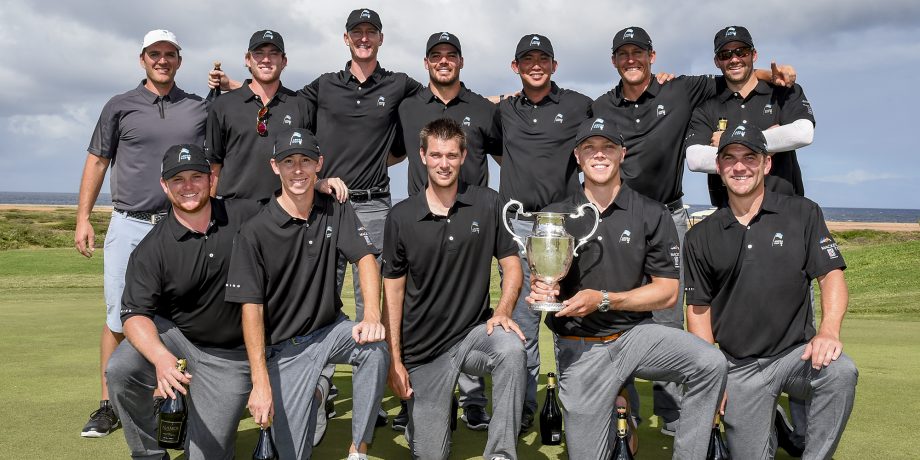 With T.J. Vogel providing the exclamation point for the third straight day, Team Mackenzie Tour – PGA TOUR prevailed in a thrilling finish to win the second annual Aruba Cup on Saturday at Tierra del Sol Resort and Golf in Aruba.

Vogel’s half point in the final match to finish gave his team a 10.5 to 9.5 tally over Team PGA TOUR Latinoamérica, allowing the Mackenzie Tour team to survive a furious charge by their opponents and giving the Canadian side their first win in the two-year history of the annual team competition.

“It feels amazing,” said Mackenzie Tour Team Captain Ben Silverman, who saw his team begin the day with a 6.5 to 3.5 lead but quickly found his side trying to hold off a late rally. “The Latinoamérica Team really pushed hard at the end, and you’ve got to give them a lot of credit for the way they fought back today.”

Needing just four points to secure the cup, Team Mackenzie Tour secured an early point as Kramer Hickok defeated José de Jesús Rodríguez 3 and 1 in a battle of each Tour’s Player of the Year. Max Rottluff and Robby Shelton also notched decisive victories, winning their matches 6 and 4 and 6 and 5, respectively, putting the Mackenzie Tour just one point from victory.

Every time it seemed victory was at hand, however, PGA TOUR Latinoamérica clawed closer to a remarkable comeback. Oscar Fraustro drained a 30-foot birdie putt at 18 to halve his match with Johnny Ruiz and keep hope alive, while Jared Wolfe turned a 1 down deficit into a 1 up win over Lee McCoy, putting the pressure squarely on the shoulders of Vogel.

After securing points thanks to clutch closing birdies in both Four-Ball and Foursomes play on Thursday and Friday, Vogel was once again put in position to decide the outcome, and he delivered yet again, making birdie at the 17th to square his match before halving the 18th to set off a celebration for the Mackenzie Tour squad.

“I’m just so happy for the team. It was a lot closer than we anticipated, but a win’s a win and I’m just happy for the guys,” said Vogel, who added that his experience early in the week helped him come through in the clutch again. “I think the first match really helped, coming down the stretch and winning the last two holes with Rico (Hoey). That really helped. I felt like as long as I was within reach, I was going to be able to close strong.”

The win caps a thrilling week and a memorable season for all 10 players on the team, especially those who earned promotions to the Web.com Tour.

“It was a great way to celebrate our success throughout the year,” said Hickok. “The year is such a grind, and the Aruba Cup a great way to reward the players who played well. It was great to get to know these guys better and spend a week with them, and I’m glad it ended the way it did.”