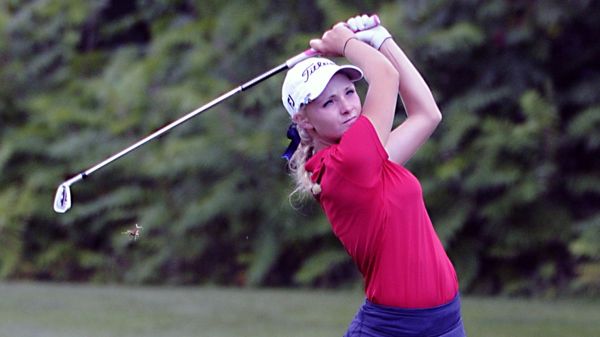 The overnight leader recorded three eagles in her second round to vault to 4-under 140 for the championship after a 3-under 69 on Wednesday. She currently sits 11-strokes clear of her nearest competitor heading into the third round at Cherry Downs Golf and Country Club in Pickering, Ont.

Szeryk, a dual-citizen of the United States and Canada, rolled in her first two eagles on the par-5 16th and 5th holes, while her third eagle of the day came from a hole-out from the greenside bunker on the par-5 7th hole.

“I’ve never made three eagles in a round, I think I’ve only ever made one before,” Szeryk said. “Making two was pretty neat and then I made the third and I didn’t even see it go in, I only heard it hit the pin from the bunker.”

A trio of players currently sit in a tie for second including, Sabrine Garrison, 17, of Calgary, Team Canada Development Squad member, Taylor Kim, 18, of Surrey, B.C., and Muni He, 14, of Pitt Meadows, B.C. He’s 1-over 73 was the second lowest round of the day and leaves her at 7-over 151 for the tournament alongside Garrison and Kim.

Defending champion, Brooke Henderson, 15, of Smiths Falls, Ont., rounds out the top five in solo fifth after posting a 5-over 77 on Wednesday. The Team Canada member currently sits at 9-over for the championship and trails He by two strokes in Juvenile division title race.

In the Inter-Provincial Team competition, the Team Alberta contingent of Jaclyn Lee, Sabrine Garrison and Brianna Carrels carded a second round 7-over 151 to capture their first Inter-Provincial title since 2004. The squad finished at 19-over 307 for the championship, 14 strokes ahead of Team Quebec.